For the epic power in Bloons Super Monkey 2, see Phoenix.
Not to be confused with Summon Super Phoenix (SSP)

Summon Phoenix (BTD5) is the final upgrade of the path 2 for the Monkey Apprentice in Bloons Tower Defense 5 and Bloons Super Monkey 2. It also appears in BTD6 (for more information, see this page). It costs $5000 on Medium.

The Master of Fire appears to be surrounded by flames. It has an orange cloak with yellow margins and carries a curved staff with a red gemstone in the tip. The Phoenix (or firebird) is orange and has firey flight feathers on the wingtips. It shrieks when the ability is activated, and a pulse of flame shoots out of the Master of Fire. The flames from the costume itself does no damage.

the center of the screen, similar to Monkey Ace when it is set to fly in an O shape. After 20 seconds, the phoenix will vanish. The phoenix can pop all types of Bloons including Camo Bloons. The phoenix uses a form of its own Dragon's Breath, similar to the Monkey Apprentice, however it shoots faster.

If the Master of Fire is sold while the Summon Phoenix ability is active, the phoenix will disappear. 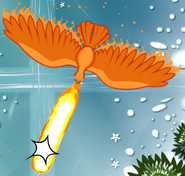 A Phoenix attacks a Bloon. 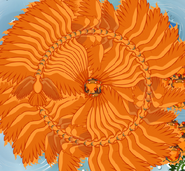 The two masters, versing each other.

BMC icon and its name change

Master of Fire and the Disciples of Fire

Apprentice card with Summon Phoenix on it.
Community content is available under CC-BY-SA unless otherwise noted.
Advertisement