Submerge and Support (sometimes referred as Decamo Sub or Submerge Sub) is the third upgrade of Path 1 for the Monkey Sub in BTD6. Once purchased, the Monkey Sub will gain a new targeting option "Submerge" and will automatically become submerged. While set on "Submerge" targeting, it cannot attack with darts, but instead it produces a regular no-damage radar attack that decamos Camo Bloons (including DDTs) every 1.5s (1.275s with Twin Guns, 0.956s with Airburst Darts). Unlike Shimmer, the radar attack has infinite pierce but is limited to 52 range.

The second-cheapest form of camo countermeasures is the use of Submerge and Support to strip camo properties. Although it deals no damage while submerged, its decamo power is reliable compared to its exceptionally low price. Because of how cost-effective it is, even one Submerge and Support can be used as the sole anti-camo option for an entire game on easier maps.

It is a lot more versatile compared to other anti-camo options, as it can be crosspathed with alternate upgrades for extra value specifically while unsubmerged, specifically Path 2 for the Heat-Tipped Darts upgrade to pop early Leads, and Path 3 for the unsubmerged extra damage output from Airburst Darts with the added benefit of quicker decamo rates while submerged. Not only that, a submerged Submerge and Support Sub pairs well with Lead to Gold and Rubber to Gold, as a submerged Submerge and Support Sub can decamo bloons without dealing damage.

Submerge and Support has been buffed mostly by increasing its submerge decamo rate for Path 3 crosspathing. 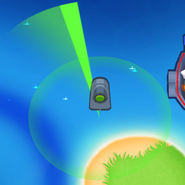 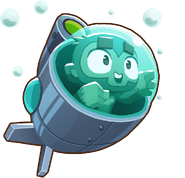 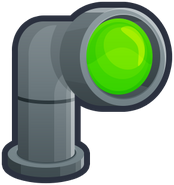 Instamonkey icon for Submerge and Support