Bloons Wiki
Register
Don't have an account?
Sign In
Advertisement
in: Articles in construction with a WIP, Monkey Sub, Bloons TD 6,
and 6 more

Sub Commander is the final upgrade in Path 3 for the Monkey Sub in BTD6. It allows the Sub to grant +4 pierce and double damage for all Monkey Subs in its radius, including itself. The double damage buff towards nearby Subs increases for most attacks that deal extra damage to any Bloon type (darts, ballistic missiles, Bloontonium Reactors, Energizers, Pre-Emptive Strike passive ability missiles) but it will not affect the First Strike ability missiles. Sub Commander buffs prioritize before Alchemist buffs (e.g. Berserker Brew).

The sub grows larger still, particularly its fins, and the navy blue prow is replaced with a brighter blue, with a gold lining; this gold lining also appears on the barrels and the railing for the platform the monkey stands on. That platform, incidentally, has gained two fins of its own, painted white with yellow tips. The rest of the sub's hull is still painted white, however the individual plates and rivets are no longer visible, and its windows have taken on a darker tint.

The monkey now wears a navy blue jacket over a white shirt; this jacket has gold buttons and cuffs, just like the previous upgrade's monkey's jacket. Their cap is still the same color.

Shoots twice as fast compared to Triple Guns, for an attack cooldown of 0.1165s.

Also gains double damage, for 4 base, with 8 MOAB damage, as well as +4 Airburst pierce, for 9.

Additionally it grants +1 damage and +4 pierce to all Subs in range (all Subs on screen with Sub Admiral MK) as well as double damage on Armor Piercing Darts, (both the impact and bursts) Bloontonium Reactor pulses, the missiles of Ballistic Missile, as well as the Pre-Emptive

missiles of Pre-Emptive Strike, but not the ability missile of First Strike Capability.

This buff is applied before all other damage buffs, so towers like Berserker Brew and Pat Fusty do not see their own damage bonuses doubled.

Sub Commander's buff targets towers and is considered an influential tower buff within given range.

Sub Commander is a highly versatile tower whose benefits lie primarily in buffing nearby Monkey Subs. Although the most powerful when paired with multiple nearby Subs, the Sub Commander itself can solo a few difficult rounds without the help of nearby Subs around it. On its own, a lone 2-0-5 Sub Commander can solo the hyperclumped Ceramics on Round 63 with relative ease on most maps, given sufficient range.

In order to make the most of this upgrade, multiple Subs should be placed nearby, preferably multiple 2-0-3 Triple Guns or multiple 0-3-2 Ballistic Missiles. 2-0-3 Triple Guns spam is highly effective against wiping out multiple bloons along a far range but with effective seeking power to catch any outlying bloons. On the other hand, 0-3-2 Ballistic Missile spam is highly effective at DPS overall, but comes at the cost of rather limited range. However, spamming enough of 0-3-2 Subs around the Sub Commander may counteract such a limitation, given how the Ballistic Missile upgrade naturally grant such Subs with a sizeable range buff.

Sub Commander initially lacked any benefit besides a passive buff for nearby Subs. It got buffed in Version 8.0 to actually buff itself, plus faster attack speed on top. It got buffed again in Version 18.0 to benefit more than just Path 3 Sub spam, and Version 20.0 slightly nerfed its pierce buff to nearby Subs to encourage purchase of additional AP Darts instead of simply adding more Triple Guns. The base pierce nerfs mean little to the Sub Commander itself because its attacks have already quite high pierce. 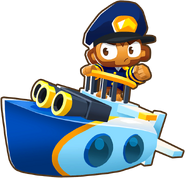