Stronger Stimulant is a 4th upgrade on Path 1 of the Alchemist. It is an improved version of the Berserker Brew upgrade, providing bonus range, pierce, and attack speed, to boosted towers for a significantly longer duration. It costs $2,125 on Easy, $2,500 on Medium, $2,700 on Hard, and $3,000 on Impoppable.

Stronger Stimulant is an improved version of Berserker Brew; its berserker potions will have a more powerful effect on monkeys, granting +3 pierce instead of +2, +17.6% attack speed instead of +11.1%, +15% range instead of +10%, and maintaining +1 layer of damage per hit.

Stronger Stimulant will give the Alchemist a more crazy appearance, along with holding two large wooden barrels with a black chimney instead of just one wooden barrel without a chimney. Along with this is that its potions will give a glass-smashing effect upon boosting a monkey. The monkey also gains an X-shaped scar on his forehead and now wears goggles on an aviator's cap. He also seems to have bushy sideburns.

When purchasing the Path 2 upgrades, it will add white gloves if upgraded to Stronger Acid, or black gloves and black mouth mask if upgraded to Perishing Potions. When purchasing the Path 3 upgrades, the Acid Pool upgrade will change the monkey's goggle shape from two eye sockets to a single lengthened socket, while the Faster Throwing upgrade will change the color of the goggles from orange to blue.

Brew lasts for the next 50 attacks or the current timed duration (12 seconds), whichever comes first. In addition, any Stronger Stimulants that expired cannot be reapplied to the target tower until the 12-second duration is over.

Artwork as seen in the upgrades menu 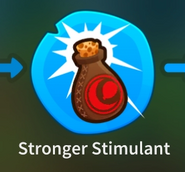 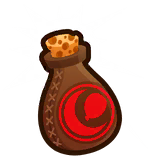 All Crosspaths of the Stronger Stimulant 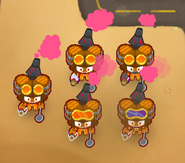 Retrieved from "https://bloons.fandom.com/wiki/Stronger_Stimulant?oldid=252438"
Community content is available under CC-BY-SA unless otherwise noted.