No (upgradable to X/X/4 via on-track glue blobs)

Stronger Glue is the second upgrade of Path 3 for the Glue Gunner in Bloons TD 6. It slows down bloons by 75% as opposed to 50%. Because it inherits the properties of Stickier Glue, glue from this upgrade will last for up to 24 seconds.

Crosspathing a Tier-2 upgrade on top of Stronger Glue will make the left-hand side of the suit turn pink, the other as purple (Corrosive Glue) or orange (Glue Splatter).

Crosspathing a Tier-3 or Tier-4 upgrade on top of Stronger Glue will add a pink pattern on the suit of the Glue Gunner.

Stronger Glue increases slowdown from 50% to 75%.

Stronger Glue is considered a Level 1 glue, unless given unless given higher-tier glues, specifically with Corrosive Glue. Higher-tier upgrades can override this glue.

Stronger Glue improves the slowdown effect of the glue to slow down bloons even further. The main usage of this upgrade alone is to greatly slow down Ceramics, allowing other towers to have more time to take them down. Stronger Glue is most often used in tandem with Glue Hose to provide more time for other towers to destroy Super Ceramics, or with The Bloon Solver to reduce distance traveled by affected Super Ceramics before inevitably popping.

Stronger Glue remains unchanged since the game first came out. 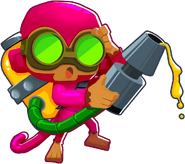 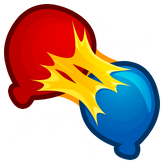 Stronger Glue as seen in the start menu
Community content is available under CC-BY-SA unless otherwise noted.
Advertisement