Stronger Acid is the first upgrade on the second path for the Alchemist in Bloons TD 6. It makes the acid effect applied by the Alchemist (and any acid pools formed if that upgrade is purchased) deal overall increased damage, increasing its damage rate from 2.0 to 1.5 seconds, as well as increasing the duration of the acid effect from 4.0 to 4.5 seconds, giving the acid 3 damage ticks.

Unlike the name of the upgrade, the Stronger Acid upgrade doesn't improve Acidic Mixture Dip buffs; rather, its upgrade Perishing Potions does this.

Dissolving bloons faster is useful in the early-game to let the affected bloons pop faster by the acidic damage-over-time effects.

Stronger Acid has so far received no balance changes.

Upgrade artwork as shown in the upgrades menu 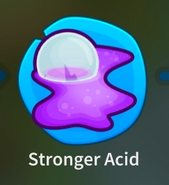 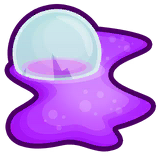