Striker Jones is a Hero in Bloons TD 6. He specializes in military weaponry. He's unable to pop camo, and mainly supports Bomb Shooters and Mortar Monkeys. He's also unable to pop Black Bloons, until level 5, which makes all Black Bloon properties less resistant to explosives. When he reaches at least Level 19, the Black Bloon property is fully nullified while he is on the map, thereby allowing any explosive projectile to damage Black Bloons, Zebra Bloons, and DDTs.

Striker Jones will start upgrading himself every round upon placement. He earns more XP each round to unlock his next upgrade irrespective of how many bloons he pops. His upgrades can also be immediately bought with cash, though the amount of cash required to purchase the next upgrade will typically increase as the upgrades get higher, making self-upgrading an important element for his overall power.

The following are the upgrades and their costs of upgrading without XP:

Striker Jones has one Hero Skin: Biker Bones. Biker Bones now changes Striker Jones into a skeleton with flaming weaponry and flaming hair, which gives him an appearance similar to the superhero Ghost Rider. His projectiles also become bone-white. Biker Bones skin is purchasable for

Level 9+ Striker Jones will now allow all explosives to have 50% chance to damage Black Bloons.

Level 5 and Level 9 upgrades were switched around. 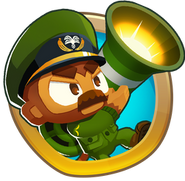 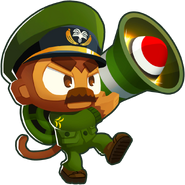 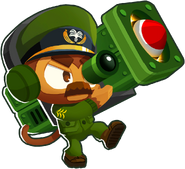 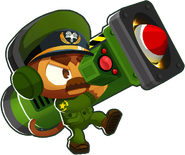 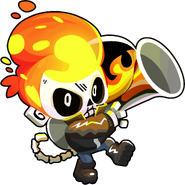 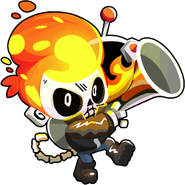 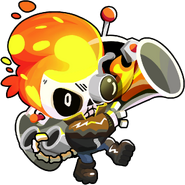 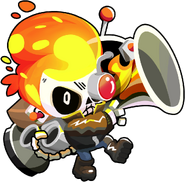 Biker Bones Level 20
Add a photo to this gallery