For the special ability used in the mission, see Sticky Sap Plant (Ability).

Sticky Sap Plant is a special mission in Bloons Monkey City. There are two plants resembling Hibiscus plants with sticky sap on them that have the same ability as Glue Strikers, with Glue Soak and Corrosive Glue effects. Also, some of the track is glue-covered and will slow bloons down, even MOAB-Class Bloons. This tile needs to be captured to build the Superior Adhesive Factory which allows for the Glue Striker ability. However, the Guerilla Tactics Training Camp can also be built on top of the Sticky Sap Plant. Upon completion, the player will receive the Extra Sticky Substance item as well as cash and XP rewards. When playing, the player receives one third of the normal amount of money received from popping bloons, so Banana Farms are recommended. The mission has 22 rounds in the first city, and 24 in the second city. Two MOABs are sent on the last round in Flash, but only one MOAB is sent on Mobile. 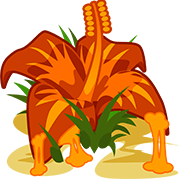 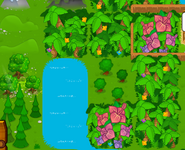 2 sticky sap plant tiles next to each other (Mobile)

The reward for this mission is the Extra Sticky Substance Special Item, which makes glue used by Glue Gunners last 20% longer and slow Bloons down 5% more.