Sticky Bomb is the fourth upgrade of Path 3 for the Ninja Monkey in BTD6. It allows the Ninja Monkey to add sticky bombs onto MOAB-Class bloons which explode after 3 seconds, dealing 500 damage to the bloon they are attached to, plus a secondary 100 damage normal-type explosion that hits up to 10 other bloons within a 40 blast radius. Sticky Bombs aim according to the Ninja Monkey's own target settings, though Sticky Bombs will attach to the first MOAB-class bloons hit by them. The range for the sticky bomb attacks is 50% greater than the Ninja Monkey's current range, and they are shot every 5.0s (or every 3.0s with 1-0-4). The Counter-Espionage (0-2-4) crosspath will cause DDTs to lose camo as soon as the Sticky Bomb is attached, the explosion will not remove camo however.

The ninja monkey dons a red Japanese oni mask, and holds a lit bomb in his left hand and a sticky bomb in his right. The sticky bomb is a glue-soaked explosive pack with a red-bulbed antenna.

Sticky Bomb is a versatile weapon for the Ninja Monkey, being a high damage projectile that sticks onto any MOAB-Class bloons it hits and goes off on a timer to deal massive damage to said target. While it sounds simple in concept, the execution of the upgrade can be significantly more tricky than expected. The time it requires for the bomb to detonate can lead to several issues if the Ninja is not placed closer to the front as it is to the back of the track, as a normal Ninja being used for Bloon popping power may be, as the less track the bomb has to detonate, the less chance that the resulting Ceramic Bloons or other child bloons will be properly handled.

The sticky bomb itself deals 500 damage upon detonation to its target, making it able to destroy a MOAB upon a successful detonation and cripple slower MOAB-Class bloons, potentially slow enough to have a second bomb applied as well. The secondary sticky bomb explosion can deal some high damage to neighboring bloons close to the exploded sticky bomb, making it easier to destroy groups of nearby higher-HP targets. Sticky Bombs can also be applied to DDTs, though the mechanics of the bomb detonating on a timer and the sheer speed of the DDT make it a difficult choice to justify as a counter-DDT measure.

Unlike the prior upgrade of Flash Bomb, Sticky Bomb serves as a secondary projectile attack separate from the main stream of shurikens and Flash Bombs. This allows the Ninja Monkey to deal consistent damage as well as plop out high burst damage to MOAB-Class bloons, making it a good competitor with the other Ninja Path 1 upgrades in terms of pure offense against both normal bloons and MOAB-Class bloons. Though Path 1 has superior Bloon popping power with Bloonjitsu, Sticky Bomb serves to be the superior MOAB damage source given enough time to work.

Several buffs were given to Sticky Bomb to make it easier to utilize the sticky bomb attack. This balance change list does not include bugs that may have plagued the Sticky Bomb's effectiveness. Excluding major bug fixes to the Sticky Bomb, the most significant buff for Sticky Bomb is in Version 27.0, where sticky bombs now produce high-damage secondary explosions. Sticky Bomb now considered a meta tower to use on Boss Bloon Events thanks to its reliable but consistent blimp damage. 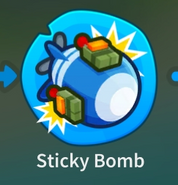 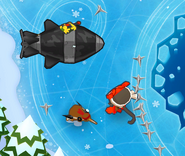 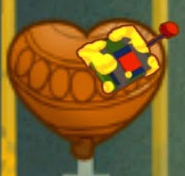 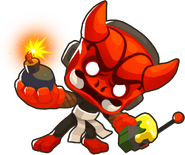 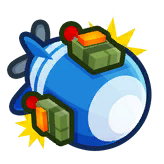 Sticky Bomb projectile when thrown or is stuck onto any blimp