Spy Plane is the second upgrade of Path 2 for the Monkey Ace in Bloons TD 6. It allows the Monkey Ace to detect and pop Camo Bloons and deal +1 damage to them with any attack and further upgrades. Monkey Aces with this upgrade also drop pineapples, as this is the upgrade after Exploding Pineapple.

The Spy Plane retains the general shape and color of all tier-2 monkey aces that imitate the Sopwith Camel design, but with two pairs of concentric blue and yellow circles. The pilot goggles are now worn on the eyes with a blue reflection. The Rapid Fire upgrade adds two red lines across the front of the wings. Lots More Darts turns the fuselage gray. Sharper Shots turns the edges of the wings red. Centered Path turns the entire ace red.

Spy Plane is a rather simple upgrade, granting Camo Detection and +1 damage to Camos to all attacks, including the pineapples, seeing as it comes after Exploding Pineapple.

The Spy Plane upgrade allows the Monkey Ace to detect camo. However, utilizing this crosspath requires forgoing the damage per second boost of the "Rapid Fire" and "Lots More Darts" upgrades in Path 1 or pierce boost of "Sharper Darts" in Path 3. So, it is generally recommended to provide ace Camo Detection from external sources like Radar Scanner or Etienne. The exception, of course, would be if going for a middle-path bomber ace or if there are camo-detection restrictions, as in the case of Challenges and Two-Tower Chimps runs.

Starting from Version 31.0, which now deals bonus damage to Camo Bloons, Spy Plane can be viable as a specialization against Camo Bloons.

Most of Spy Plane's balance changes have been inherited from previous upgrades, however 31.0 finally gave it a buff of its own, that being the ability to deal +1 damage to camos with all attacks. 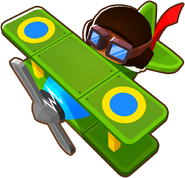 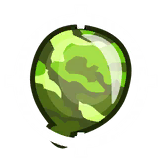