Sprockets is the third upgrade of path 1 for the Engineer Monkey in Bloons TD 6. It allows the Engineer's nailgun and any newly spawned sentries to attack 66% faster. The Engineer's improved sentries are still deployed every 6.0s. In addition, sentries with this upgrade inherit the pinning properties of Pin.

An Engineer with Sprockets receives a black construction helmet with two green arrowhead symbols pointing downwards. On the Engineer's left hand, the wrench's grip is changed from red to yellow. On the upgrade portrait, the Engineer leans on his sentry in a casual way, leaning with his left arm, crossing his legs while standing up, and looking at the sentry while smiling.

Crosspathing with path 2 places a yellow, or white with blue lead pencil atop the Engineer's left ear.

Crosspathing with path 3 adds a grey extension to the nail gun's barrel, and paints the helmet's front white, before swapping it for a dark grey helmet and giving the Engineer a pair of orange and black gloves.

When crosspathed with Pin, the sentries may also pin bloons.

Sprockets, like all Engineers with Path 1 upgrades, can deploy sub-towers called sentries, targeting them such that they prioritize unoccupied land. Newly spawned sentries inherit the parent Engineer's targeting priorities, and also shoot straight movement projectiles. Targeting priority for all sentries use standard targeting priorities (First, Last, Close, Strong) and can be changed at any time.

Sprockets Nail Sentry is simply an upgraded version of a Nail Sentry, and is named as a "Sentry". Just like the normal Nail Sentry, the Sprockets Nail Sentry appears green and shoots nails. It shoot nails every 0.57 seconds, and each nail can pop 2 bloons (3 with Oversize Nails) and they have a range of 45 (+4 with Larger Service Area). The nails are of the sharp damage type and cannot pop lead or frozen without special upgrades. Crosspathing with Oversize Nails changes the sentry damage type from sharp to shatter (sharp + frozen-popping). One unique crosspathing interaction is being able to receive benefits exclusive to the Pin upgrade, allowing these sentries to pin bloons.

Most problems with Sprockets were addressed with its earlier upgrades, thereby buffing the value of Sprockets in return.

3-1-0 Engineer with many sentries within range 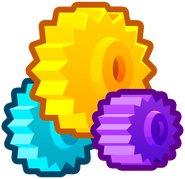