Bloons Wiki
Register
Don't have an account?
Sign In
Advertisement
in: Outdated pages, Articles in construction with a WIP, Articles that need more images,
and 9 more

Spirit of the Forest is the final upgrade of Path 2 for the Druid in Bloons TD 6. Once bought, it immediately starts growing powerful persistent vines from within its range which then spread further out by 20 range units every 0.5 seconds until the entire track is covered. In addition, the ability now grants 25 lives per usage alongside the normal Jungle's Bounty effect. If the player has 1000 lives or more, the ability merely grants two extra lives. And lastly, it gives $1000 at the end of each round. Three types of vines are grown: one within 50 range of the Spirit, a second type between 50 and 100 range and then a third variety everywhere beyond 100 range. The brambles deal contact damage to an infinite number of bloons every 0.5 seconds, with the amount dealt per tick depending on the bloon and vine type:

These can pop Camo Bloons but not Frozens or Leads unless given Hard Thorns crosspath or an external support such as MIB. Paths that are taken multiple times by Bloons may have a thicker layer of vines. This is purely visual, unless using the Vine Rupture ability. Spirit of the Forest also receives +1 damage to all of its main attacks.

Besides the improved Jungle's Bounty ability and bonus $1000 income per round, the Spirit of the Forest is a decent offense option against regular bloons. Its infinite pierce from its near-global range vines is a major virtue of this tower, allowing it to always constantly deal damage to bloons. Similarly to the Glaive Lord's orbital glaives, the Spirit of the Forest works the best if bloons are slowed as much as possible, so as to provide as much time to slowly destroy bloons as possible. Although not the most useful Tier 5 on CHIMPS, it is still viable on CHIMPS Mode, especially after numerous buffs applied to it.

None, as of now

Overall buffed, more specifically for the power of the track vines. It also received a sizable price buff in Version 21.0 to give it more use in practical CHIMPS scenarios. 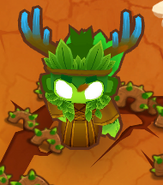 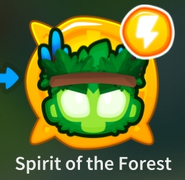 Spirit of the Forest as it appears in the BTD6 Teaser 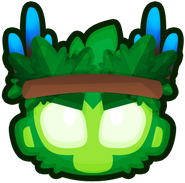 Instamonkey icon for Spirit of the Forest