Spiked Mines is the 4th upgrade of Path 1 for the Spike Factory in Bloons TD 6. It allows its depleted spike ball piles to create powerful explosions, dealing 10 damage each onto up to 40 bloons, alongside a powerful burn effect that deals one damage per 2.0s for 6 seconds. The blast radius of the explosion is 19, around the size of the explosions from Bigger Bombs. Explosions deal double damage if the spiked mines automatically expire rather than if the spiked mines are fully depleted. Each spike also deals an additional +3 damage to Ceramics, for a total of 8 damage against Ceramics.

The mines themselves now also bear a skull-and-crossbones on them, and they are slightly lighter in color.

Crosspathing with path 2 raises the vents slightly and paints them yellow, then raises them again nearly to the level of the spike port.

Crosspathing with path 3 paints the lower half of the structure blue, including the vents, before adding gears between the support beams.

Spiked Mines gains an additional +3 ceram damage per spike compared to Spiked Balls, for a total of 8, and also now sees the mines explode when their pierce is fully consumed or they simply disappear by time.

The explosion created deals 10 damage with 40 pierce and a blast radius of ~19, as well as inflicting a napalm that deals 1 damage every 2.0 seconds for 6 seconds.

If the mines expire by time, the explosion deals double damage.

Spiked Mines defaults on Normal targeting priority, which dispenses the spiked miness onto nearby bloon track in a semi-sporadical behavior. If given Smart Spikes, it will also receive Close, Far, and Smart.

The main power comes from the heavy explosives that spawn from depleted spiked mines. These deal 10 damage each, enough to shred through stronger bloons and deal a chunk of damage to blimps. The main use for the Spiked Mines in most games is to beat difficult pre-Round 81 bloon rush rounds with ease. Compared to other Spike Factory upgrades, it is surprisingly good at beating Regrow Bloons (with the exception of Regrow Blacks and Regrow Zebras), and it cleans up densely grouped bloons very effectively, unlike its previous upgrade Spiked Balls. In fact, Spiked Mines can be used as a pure offensive stockpiling tower with the 4-2-0 crosspath, although still better suited for tanking bloons as most Spike Factories are designed to do.

Spiked Mines had been buffed overall throughout updates in this game. Substantial damage buffs for the explosions, added price reductions, an increased blast radius, and several Spiked Balls inherited buffs have made the Spiked Mines upgrade stronger in mid-game settings, more specifically versus mid-game grouped bloons.

During the 20's updates, Spiked Mines has consistently been buffed in order to compete cost-efficiency as a grouped damage Spike Factory versus the mid-and-late-game flexibility of Spiked Balls. 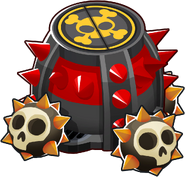 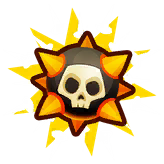