Spiked Mines is the final upgrade for path 1 of the Spike Factory in Bloons Tower Defense 5. Each spiked ball can pop up to 16 bloons before exploding. There is a skull on top of the spiked mine production chute, and a skull on top of the mines it produces. This upgrade rigs the spike balls with heavy explosives, causing them to go off when they lose all their spikes, as well as doubling the tower's deployment speed (BTD5 only). The explosion gives bloons a napalm effect, similar to the Mortar Tower's Burny Stuff upgrade. The napalm pops bloons every 2 seconds for 6 seconds. The explosions pop 4 layers.

It is far more powerful in the Flash series, because of its immense attack speed bonus and overall great damage output. It can even be more useful than MOAB-SHREDR Spikes in that regard. Spiked mines are not suitable for bloon rushes for especially round 49, 53, 61, 62, 63, 65, 69, 70, 78, 79, 82, and 83. This is because the explosions only impact the bloon that is already destroyed by the spikes and no other bloon other than one other bloon will be hit. A spike mine can single handed destroy a ZOMG if put at the end of a long trap so the max number of mines are placed without any buffs.

In the Mobile series, however, it is substantially weaker than the Flash versions, as it doesn't attack as quickly, as well as the fact that mines expired by time expiry do not explode.

Spiked Mines have smaller explosions and negate the popping power of the Spiked Ball Factory upgrade (each ball pops 16 bloons before exploding instead of 20).

Spiked Mines do not explode when they disappear after time.

Base Spiked Mines in BTD5

Spiked Mines without and with Even Faster Production 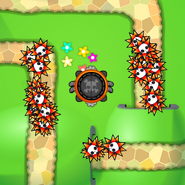 Beating round 101 with only Spiked Mines 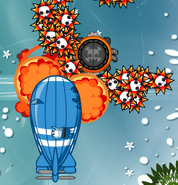 Spiked Mines exploding at MOABs
Add a photo to this gallery

Retrieved from "https://bloons.fandom.com/wiki/Spiked_Mines_(BTD5)?oldid=272704"
Community content is available under CC-BY-SA unless otherwise noted.