The Spiked Balls upgrade converts the Spike Factory's spike piles into spiked balls. These spiked ball projectiles are light-black balls tipped with orange spikes around them. When a spiked ball reaches below 10 health (i.e. less than 10 pierce left), it will slowly degrade by one spike at a time.

The body of the Spike Factory with the Spiked Balls upgrade becomes red on its upper body and grey on its lower body, with a lighter shade of grey at its front. The icon on its "belly" becomes a 9-pointed curved star, implying the shape of its new projectiles. Its "feet" are now red and are elevated by a light-grey base. Its spout is enclosed by 6 grey sector-shaped flaps that open perpetually whenever it releases spiked balls. Its "furnace holes" from the White Hot Spikes upgrade remain, surrounding its spout. The Spike Factory also gains spiked protrusions across the top of its body.

Spiked Balls defaults on Normal targeting priority, which dispenses the spiked balls onto nearby bloon track in a semi-sporadical behavior. If given Smart Spikes, it will also receive Close, Far, and Smart.

Spiked Balls is a powerful mid-game upgrade that can be used for tanking a considerable amount of stronger mid-game bloons, particularly against spaced to small groups of Ceramic Bloons. With its increased pierce and damage per spike, particularly versus Ceramics and Fortified Bloons, it becomes a viable option as a backup defense when placed near the end of the track. Spiked Balls is additionally still highly valuable for late-game when it comes to cleaning up spaced Super Ceramic leaks, especially on short maps.

Similar to almost all Spike Factory upgrades, it would be wise to place Spiked Balls as back from the map track as possible to maximize the size of its spiked ball stockpiles. Similarly, add backup defense to reduce the overload for the Spiked Balls, and it will be able to complement with good cleanup of any bloons that manage to sneak by the main defenses.

While the rate of producing Spiked Balls is higher with 3-2-0, the total number of spike piles becomes at least roughly equal with 3-0-1 starting from ~81 seconds, ignoring bloons already hitting stockpiles.

Spiked Balls has overall been buffed since it was first introduced in the game. Initially, it had nearly equal statistics to its BTD5 counterpart, but later it had been buffed across several updates.

The most significant buff that Spiked Balls received was gaining +1 damage per spike, allowing it to become a solid option for mid-game defense while further improving its late-game usability. Since then, the power of the 3-2-0 Spiked Balls has been toned down considerably with an overall base projectile lifespan nerf, a slight price increase, and a pierce nerf, but nonetheless is still considered a strong tower overall and has made its way into the general CHIMPS meta. 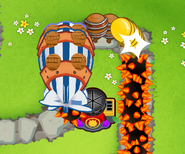 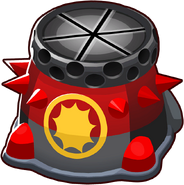 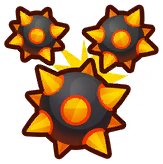