Spike Storm is the fourth upgrade for Path 2 for the Spike Factory in Bloons TD 6. It grants an ability that produces a total of 200 piles over every lane on screen, evenly shot within the span of 1s. Unlike most attacks, the Spike Storm ability cannot be affected by attack speed buffs, with exception of the start-of-round benefit from Smart Spikes. Just like MOAB SHREDR, the previous upgrade, all spikes from this Spike Factory including those from the ability will deal +4 damage to MOAB-class bloons, inflicting 5 damage to them per spike. Cooldown for this ability is 40 seconds, and each spike pile spawned from the ability last for up to 10 seconds or 2 rounds before disappearing, whichever comes first.

Spike Storm ability has a few special interactions with crosspathing. Bigger Stacks increases the pierce of each spike by +5, and White Hot Spikes allows it to damage Frozen and Lead. Long Reach increases the lifespan of the ability spikes by 50% (from 10 to 15 seconds). Smart Spikes makes the Spike Storm ability only target active lanes and is able to be affected by the start-of-round benefit from that upgrade.

This upgrade removes the two rectangular protrusions from the side, resulting in an tapering cylindrical shape. It loses its white three-tack decal on its side. The black opening becomes a black-gray swirl, it gains two curved lime-colored openings on its side, and four circular vents are situated at its base.

Crosspathing with path 1 first adds a red rim around the main spike port, then paints the entire factory red; the spike piles are also visibly denser, then white-hot.

Crosspathing with path 2 paints most of the lower body blue, with a lighter shade of blue along the side facing the screen, then adds two light grey gears either side of the main port.

Spike Storm gains the Spike Storm ability, which produces 200 spike piles over the course of 1 second, distributing them evenly along the entire track, with a cooldown of 40 seconds. These spike piles have all the properties of the normal piles it launches with its main attack, including benefits from Bigger Stacks and White Hot Spikes, except for lasting only 10 seconds or between rounds. Technically speaking, the spikes from the ability come out of the spout and can hit bloons while travelling to their respective locations on the lanes.

Smart Spikes increases the ability spike pile lifespan by 50%, or 15 seconds, causes ability spikes to only target active lanes, and applies its start-of-round 4x attack speed bonus to the ability, potentially spawning up to 800 spikes if the ability is used within 2.5 seconds of the round starting. Technically speaking, the Smart Spikes crosspath allows for a very brief window of opportunity to let the ability accept all speed buffs, instead of only getting affected by the start-of-round benefit.

Spike Storm defaults on Normal targeting priority, which dispenses the spikes onto nearby bloon track in a semi-sporadical behavior. If given Smart Spikes, it will also receive Close, Far, and Smart.

Spike Storm's ability is targeted across the whole screen and on the track. With 0-4-2, the tracks targeted are reduced to only the active lanes.

Spike Storm is a powerful option for covering spikes across the screen for widespread damage. Due to inheriting the properties of MOAB SHREDR, which allows it to deal increased damage to MOAB-class bloons, its ability is a good option for severely damaging small groups of weaker MOAB-class. Although most effective at breaking down MOAB-class layers, it still serves a purpose as an emergency stopper against leaking bloons. The Spike Storm ability is stronger versus normal bloons compared to MOAB SHREDR, but it is not a fully reliable option for handling them.

The main use for Spike Storm is its incredible power at breaking down MOAB-class bloons, most especially on rounds where the main issues are spaced blimps. Both crosspathed Spike Storm options are equally viable versus singular BADs in their own right, with the 2-4-0 being more effective overall but 0-4-2 more reliable in specific scenarios and against just the BAD's tough layer. When paired with Bigger Stacks and White Hot Spikes, the Spike Storm's main strength comes from countering DDT layers and countering the DDT offspring of singular BADs, provided that other defenses handle all other bloon types so that its spikes do not waste on much weaker bloons, as well as for handling singular BADs themselves.

Spike Storm is widely used as a widespread anti-MOAB-class option, even in the initial release of the game. It received some noteworthy buffs to push the Spike Factory's popularity outside of just Perma-Spike. Crosspathing benefits for its weaker 0-4-2 crosspath have also been implemented to compete with the traditionally popular 1-4-0 and 2-4-0 crosspaths. Version 27.0 nerfed Spike Storm ability to no longer become affected by attack speed buffs of any kind, which greatly reduced its synergy with any speed-boosting upgrades or even with the buffed Smart Spikes upgrade's start-of-round benefit, though the crosspath benefit was added back in 29.0.

Spike Storm ability carpet on Cubism with no crosspaths

0-4-2 Spike Storm ability carpet on Infernal at Round 64, with a bit of depleted spikes

2-4-0 Spike Storm ability on In The Loop 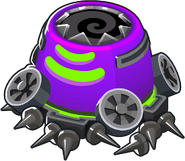 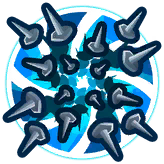