Spike Storm is the final upgrade for the Spike Factory in Bloons TD 4, and the final upgrade of Path 2 in Bloons TD 5. This upgrade allows the Spike Factory to cover the track with an almost unstoppable wave of short-lived spikes (they disappear quickly once the effect is over) every 15 seconds in BTD4. In BTD5, it appears as an activated ability has a one minute cooldown. In addition, it does heavier damage to MOAB-Class Bloons because it has the MOAB-SHREDR Spikes upgrade before it. In BTD6, this upgrade returns with similar features to the BTD5 ability. 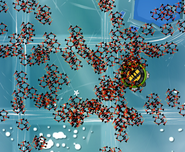 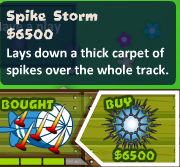 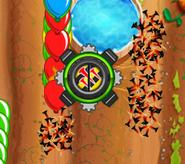 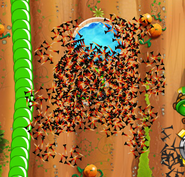 Retrieved from "https://bloons.fandom.com/wiki/Spike_Storm?oldid=240844"
Community content is available under CC-BY-SA unless otherwise noted.