Bloons Wiki
Register
Don't have an account?
Sign In
Advertisement
in: Articles in construction, Articles that need more sounds, Pages with broken file links,
and 6 more

The Spike Factory is a Support-class tower that was released in the initial release of Bloons TD 6. The tower retains its name and role from the Bloons TD 4 and 5 Generation, with significant additions. It did not receive any teasers prior to release, but it was first shown when the game was available to select YouTubers several days before BTD6's official release date.

Spike Factory produces spike piles sporadically around its range onto nearby bloon track. Spike piles have a set amount of spikes, equivalent to pierce of each spike pile. By default, Spike Factory spike piles have 5 pierce, but upgrades such as Bigger Stacks increases their pierce. Each spike pile is produced every 1.75s and lasts for up to 50 seconds. Spikes disappear after ending a round, but spike piles can last longer by purchasing Long Reach and its later upgrades. Powerful upgrades include hard-shelled spiked balls, deadly mines that explode upon spike depletion, a wave of shredding spikes, and near-permanent spikes.

The Spike Factory is a white-colored machine with four "feet", the front two "feet" larger than its back two, and a spout on its "head". The front of the Spike Factory has an icon depicting a circle with three tacks inside. On the right side from the perspective of the player, its steam channel is located there.

In a similar manner to prior installments, the Spike Factory shoots out clumps of five spikes at a rate of one spike pile every 1.75 seconds. Compared to other towers that transitioned from Bloons TD 5 to Bloons TD 6, the Spike Factory is one of few that has both its original upgrade lines intact. Spikes by default last for 50 seconds or 1 round, whichever comes first. Spikes can last for more time or more rounds with most Path 3 upgrades.

Path 1 is primarily based upon making stronger spike piles. Bigger Stacks increases number of spikes per pile from 5 to 10 (or 50 to 90 with Perma-Spike). White Hot Spikes allows popping of any bloon type, including Frozen and Lead, increasing power of spikes further. Spiked Balls (returns from Spiked Ball Factory) replaces usual spikes with spiked balls, dealing even more damage to all bloon types while further increasing pierce, especially versus Ceramics and Fortified. The Spiked Mines upgrade adds powerful explosions into each spiked ball that activate upon depletion. The new Tier 5 upgrade surpassing the upgrade now creates even more powerful mines at a much slower rate, capable of wiping out crowds of stronger bloons with ease.

Path 2 focuses on aggressive production, starting with faster production with its first two upgrades, Faster Production and Even Faster Production, and then leading to MOAB SHREDR (returns from MOAB-SHREDR Spikes) for increased damage to MOAB-class, and its final upgrades Spike Storm and Carpet of Spikes increasing the Spike Factory's potential for widespread area damage. The Carpet of Spikes upgrade bases upon the old Spike Storm upgrade from BTD4 by making each spike storm automatic while dealing even more damage overall.

The new Path 3 is a more tactical one, providing a variety of utilities that improve spikes overall. This includes providing increased area of coverage to a targeting priority to spikes that last longer before timing out and even pass over to the next round. Long Reach increases the range of the Spike Factory and increases lifespan of spikes. Smart Spikes (formerly named Directed Spikes) adds target priorities to the Spike Factory, increasing its reliability on multi-lane maps, and adds a brief but quick boost of attack speed whenever a round begins. Long Life Spikes takes the long lifespan spike further by allowing spikes to carry over rounds and last even longer on the track. Deadly Spikes increases the round lifespan further and deals extra damage. Perma-Spike takes the spike longevity concept even further by manufacturing high-damage spikes with very long lifespan but at a much decreased production speed.

Items for the Spike Factory are available in the Trophy Store. The "Spike Factory Pineapples" cosmetic changes the Spiked Balls, Spiked Mines, and Super Mines so that they resemble Exploding Pineapples.

The base Spike Factory defaults to Normal, which sets it to produce spikes in a pseudo-random formation, it will always target the same set of spots, using the same placement sequence in a loop. It gains extra target priorities once the Smart Spikes upgrade is bought.

Alternate attacks have a different set of target priorities:

Spike Factories naturally can ignore Line of Sight due to how their lobbing attack. Similar to Alchemist potions, most Spike Factory spikes cannot deal air damage mid-way through flight. Instead, these spikes leap over until they eventually reside to their intended spot. Spikes produced right above the Spike Factory, however, will register for collision until the spikes move linearly outwards.

The nature of the Spike Factory is to produce stockpiles of spikes. This allows it to build up spikes over time and therefore improve its primarily cleanup role. Spikes do not last infinitely, however, meaning that spikes will begin to deplete as rounds progress and spikes expire automatically whenever rounds ends once round lifespan is reached. More durable spikes can withstand longer periods of time before they begin to deplete or last for a longer number of rounds. Giving spike piles with extra time lifespan and round lifespan are both accessible via most Path 3 upgrades.

Maximum stockpile potentials of main spike attacks are listed below, ignoring start-of-round benefits from Smart Spikes or any external benefits:

For Spike Storm abilities, these spike stockpiles are treated differently. More specifically, the number of spike piles on screen is irrelevant compared to the total spikes on screen due to the fact that determining the number of maximum spike piles is extraneous information. Rather, it is better off looking at the maximum damage potential, average damage potential, and ability's uptime. Average damage potential is increased by shorter bloon tracks and can be affected by ability uptime. Ideally, Spike Storm abilities deal the most damage on shorter maps, maps with single entries and single exits, and maps with intersecting lanes (e.g. Logs, End of the Road, Winter Park); Blons would be the theoretical best case scenario.

The values given for average damage potential are tested on Medium (base bloon speed) and on Hedge, a map with an average potential for possible intersecting points, contains only one entry and exit, and is relatively long. Testing for blimp damage is done with a Round 100 BAD.

When excluding external buffs, the following are the stats for Spike Storm and Carpet of Spikes abilities:

For explosions from Spiked Mines and Super Mines:

This section displays Monkey Knowledge that has effects on Spike Factory and its changes when compared to one by default:

Most Spike Factories lack a sound, except for explosions from Spiked Mines and above, and abilities from Spike Storm and Carpet of Spikes.

This section is incomplete due to the lack of a sound. You can help by expanding it.

When a Spike Factory is placed on screen: 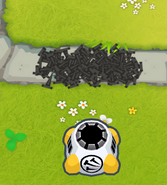 Testing with Cryo Cannon, proof that Spike Factory spikes leap over bloons rather than cut right through them 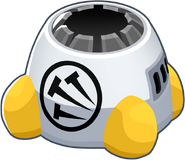