Spike-o-pult is the third upgrade of Path 1 for the Dart Monkey in Bloons TD 6. With this upgrade, the Dart Monkey becomes a catapult operator, shooting out bouncy spiked balls that pop many more bloons and last longer. Each Spike-o-pult ball pops up to 22 (23 with the "Extra Dart Pops" Monkey Knowledge) bloons, deals +1 damage to ceramics, and can pop Frozen Bloons. Just like its BTD4 and BTD5 counterparts, attack speed decreases with this upgrade, specifically from per 0.95s to 1.15s.

Spike-o-pult possesses very high pierce compared to its low cost. To maximize its substantial pierce, it is best placed along straight lines to pop many bloons along the line. Dart Monkeys with the Spike-o-pult upgrade attack slower, however, so placement is key. It is decent on maps with obstacles, such as on Hedge or Moon Landing, because the spiked balls can bounce off walls. Otherwise, this upgrade generally serves as a stepping stone to Juggernaut.

Spike-o-pult is cheaper than it did in BTD5, but remains underused, despite balance changes buffing it by a fair bit. Normally, this upgrade is used the most on Race Events that enable this upgrade, although less than other options. Otherwise, it's usually just a stepping stone for Juggernaut.

The Version 25.0 nerf is insignificant once the upgrade is unlocked anyway, and only affects newer players. It swapped XP requirements with Crossbow to encourage newer players to try that upgrade instead. 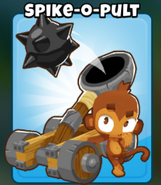 Crosspathing in BTD6 (path 2 on top, path 3 on bottom) 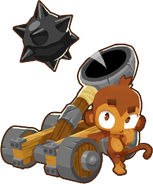