The Spike-O-Pult is an upgrade for the Dart Monkey that appears in BTD4, BTD5, BTD Battles, and Bloons Monkey City. It changes the projectile of the Dart Monkey to a large spiked ball with higher pierce but slower attack rate.

In Bloons TD 4 and Bloons TD 4 Expansion, this upgrade is the Dart Monkey's third upgrade. On Easy this upgrade costs $255, on Medium it costs $300, and on Hard it costs $325. The Triple Shot upgrade from Bloons TD 3 was renamed for Bloons TD 4. It became the Dart Monkey's 4th upgrade and was called Multi Shot. Place these towers at the end of long lines with target priority set to last for maximum effectiveness. Spiked balls will not explode if you have Splodey Darts.

A Spike-O-Pult in BTD5 Flash 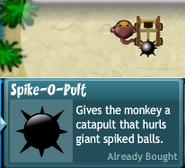 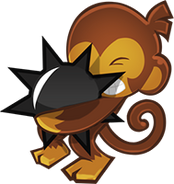 BMC artwork and name change
Add a photo to this gallery
Retrieved from "https://bloons.fandom.com/wiki/Spike-O-Pult_(BTD4-BTD5)?oldid=269070"
Community content is available under CC-BY-SA unless otherwise noted.