Bloons Wiki
Register
Don't have an account?
Sign In
Advertisement
in: Articles in construction with a WIP, Articles that need more images, Monkey Ace,
and 7 more

Spectre is the fourth upgrade of Path 3 for the Monkey Ace in Bloons TD 6. Just like in BTD5, the Spectre replaces the usual Neva-Miss Targeting homing darts with a single stream of rapidly alternating have slight homing darts and bombs, which fire 15 times per second (one projectile every 0.06s, or 0.045s with Rapid Fire). Each dart deals 2 damage and has 15 pierce (+25% pierce with Lots More Darts), while each bomb deals 3 damage and has 30 pierce (45 pierce with Exploding Pineapple). Additionally, both attacks deal +2 damage to Ceramic Bloons. However, unlike in BTD5, the Spectre's bombs do not harm Black Bloons, so it cannot damage DDTs without a Monkey Intelligence Bureau or similar upgrades, even if it has camo detection. Also, the Spectre upgrade is now split from the Rapid Fire upgrade path, which may potentially force either external camo detection for an attack speed bonus or internal camo detection in exchange for no additional attack speed bonus.

Spectre is a much larger plane than its predecessor, Neva-Miss Targeting, retaining the signature red and blue roundels of this path while having a single long pair of wings with four red engines. Its artwork shows it dropping twin lines of bombs painted green with yellow stripes, similar to Mortar Monkey shells, however in-game it actually fires the orange-striped darts of its previous upgrades and dark grey bombs bearing a red nose.

Like all Monkey Aces, Spectre uses flight patterns as its targeting priority settings. It can also access Centered Path targeting option due to being an upgrade from the respective upgrade that grants it.

Spectre's alternating dart-and-bomb attacks is locked to First, and the darts can home weakly at bloons.

Due to the Spectre's high pierce and damage, it is an excellent mid-game upgrade. Its largest benefit compared to other midgame towers is that it has global range, meaning it has additional viability on multipath maps or maps with a lot of length for Spectre to utilize. Due to its high pierce, it can very quickly dispatch heavy bloon rounds such as Rounds 63, 76 and 78.

Do note that however, it can sometimes have subpar damage against Fortified Bloons, and becomes less effective once Super Ceramics appear starting Round 81. It is possible to use the Spectre as a main DPS tower even late-game with a lot of support, although it is frequently outclassed by towers such as Sky Shredder paired with Stronger Stimulant and Apache Prime in this regard.

The Spectre can completely eliminate anything that is not a MOAB-Class Bloon in less than a second, so use that to your advantage. Although it is very powerful against pre-round 80 Ceramics, it may sometimes miss due to the long travel time of its projectiles. Adding slowdown support such as Bloon Sabotage or Glue Hose, or simply micromanaging the Spectre's flight to keep it closer to its targets will help it miss less often.

Before Version 4.0, Spectre was much more powerful than the Apache Dartship for less price. Now, with a very slight nerf to Spectre (but with no change to the Flying Fortress by extension) along with an Apache Dartship price drop has made the Spectre a little more on even grounds.

In Version 8.0, Spectre was nerfed in price but with a damage buff to compensate, mainly to counteract the easy Deflation wins.

Version 23.0 introduced a small buff to Spectre darts, while Version 28.0's rework by increasing Ceramic damage over a reduced dart and bomb pierce is an overall buff, as Spectre bombs have huge pierce anyway that giving both dart and bomb attacks with bonus Ceramic damage still makes a big impact on the most dangerous grouped mid-game rounds anyway.

Spectre without Path 1 upgrades attacking in BTD6 (after 4.0 update). This Spectre is 0-2-4 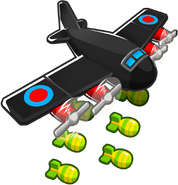 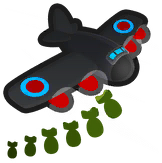