Spectre is the final upgrade on path 1 for the Monkey Ace in Bloons TD 5. It makes the plane continuously fire bombs and darts very quickly directly at the bloons instead of firing eight darts. The bombs can pop lead bloons and black bloons (in the BTD5 generation). With the Spy Plane upgrade, they can target any bloon or MOAB class bloon within range and can easily destroy grouped bloons.

With a update on March 22nd 2012 in BTD5, the bombs from the Spectre pops 2 layers of Bloons instead of 1. As a result, the Spectre is now the cheapest effective tower against non-MOAB class Bloons.

The Spectre doesn't have target priority and will shoot whatever is closest. To counteract this, it's better to place it off to the side so that the Bloons are always coming towards it. That way, it will generally target "First". However, it stops shooting if the plane flies too far off-screen.

Spectre bombs can duplicate if the landing pad is under the influence of a Monkey Fort.

Generally speaking this upgrade is only bought to defend against Round 32 A.I. or sometimes Bloon Adjustment, due to how expensive it is to get up a Spectre ($21475 including path 2 upgrades). Overall this upgrade has been buffed, but not significantly. 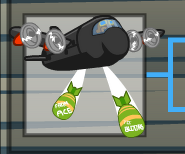 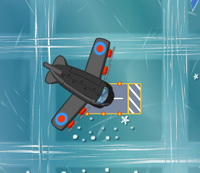 Spectre and its pad on Flash versions of the game

The Spectre on its unlock screen 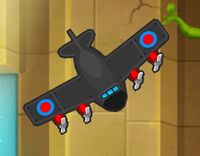 Official BMC artwork
Add a photo to this gallery

Spectre destroying a huge bloon rush, alongside about to target a MOAB

Retrieved from "https://bloons.fandom.com/wiki/Spectre_(BTD5)?oldid=269519"
Community content is available under CC-BY-SA unless otherwise noted.