Space Truckin' is the 4th Beginner Difficulty track on Bloons Tower Defense 5. It was released in an update on August 30th, 2012.

This map takes places in space with 4 planets (Mercury, Venus, Earth and Mars), the Moon, and the Sun. Towers cannot be placed on the sun or anywhere in space, but aquatic towers can be placed in the oceans on Earth. It is a fairly easy track to beat on all three difficulties because the several loops give the player several chances to pop bloons, but the space limitations can make it difficult to position towers as desired.

A Red Bloon can cross the map in 97 seconds without fast-forward mode and 16 seconds in fast-forward mode. This makes it one of the longest tracks in the entire series (the former second longest being Brick Wall at 79 seconds). ZOMGs take 6 minutes and 6 seconds to cross. 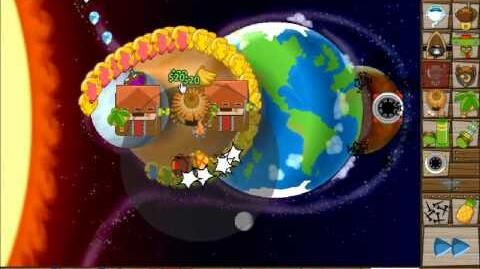