This upgrade has been replaced by the Prince of Darkness upgrade on July 23, 2018 (version 2.0) and no longer exists.

It was replaced by Prince of Darkness in Version 2.0.

Upon purchasing the tower, the Soulbind ability would be unlocked and its icon would appear in the ability interface. To Soulbind a tower, the player would tap the Soulbind ability icon, bringing up the prompt "Select a Tower to Soulbind", displaying a target reticle over any tower available to be Soulbound. Upon sacrificing a tower to Soulbind, the tower would be surrounded in a green aura for a short time and a sprite of a green skull would appear above the tower. At any point if the players life count were to dip below zero, any Soulbound towers would be sacrificed in exchange for lives, removing the tower from the map and increasing the players life count.

The Soulbind ability had a cooldown of 10 seconds.

Soulbinding many towers around the whole screen 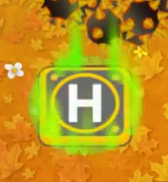 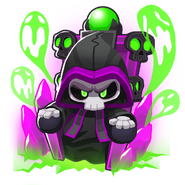 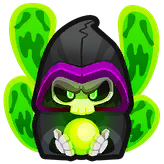 Hidden Instamonkey icon for Soulbind, unchanged from Prince of Darkness 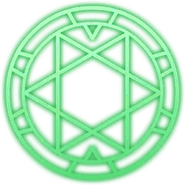 Icon for a soulbound tower

BTD6 - Can I leak a BAD? (Banana Research Facility spamming)