Freeze (ability)
Freezes bloon in place and makes sharp projectiles unable to damage the bloon for 6 seconds, but 2 seconds if the bloon is camo, white, zebra or MOAB-class when ability is activated.

Slow
Slows down bloons in range by 50%, does not affect frozen-immune

Snowstorm is the fourth upgrade of Path 2 for the Ice Monkey in Bloons TD 6.

It grants the Ice Monkey an activated ability, which does 1 damage to all bloons on screen other than Leads and DDTs if not given lead-popping, then proceeds to freeze all bloons (with exceptions). It freezes most bloons for 6 seconds, but freezes MOABs, Camos, Whites and Zebras for 3 seconds. Leads and DDTs are completely immune to any ability effect unless using the 2-4-0 crosspath or given lead-popping, to which then will be able to be dealt damage and become frozen for the full period. Cooldown is 30 seconds upon activation, along with a 10 second initial cooldown prior to first activation upon purchase.

Additionally, the upgrade grants the Ice Monkey with +10 range (equivalent to +50% extra range).

The ability for Snowstorm is brief and comes with an extensive cooldown, but in certain situations it can make a big difference with turning the tides of the game. When used wisely, it can clump up MOAB-class bloons and stops all bloons in place temporarily, allowing more time for other towers to destroy bloons. Using the ability willy-nilly, conversely, can detriment the defenses, especially for defenses that find it hard to counter Frozen Bloons.

The one other benefit for Snowstorm comes from the extended range, extending the effects of Arctic Wind further. This allows bloons to be slowed down at a further range, and it improves the range at which land towers can be placed on water.

The Snowstorm ability was initially a minor ability that only applied a damaging freeze to bloons. Later on, Snowstorm now adds more base freezing range in addition to improvements to the ability too.

2-4-0 Snowstorm freezing a DDT with ability 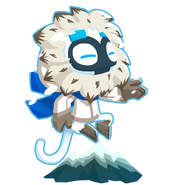 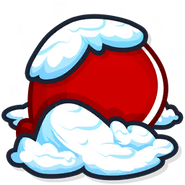