Snap Freeze is an upgrade for the Ice Tower that was introduced in Bloons Tower Defense 3. When a bloon is hit by the Ice Tower, it will pop a layer of that bloon and then freeze the layer below in the process. In BTD4, an Ice Tower with Snap Freeze appears identical to the regular Ice Tower, albeit with 3 additional Upgrade Marks by the side.

In Bloons TD 4 it is the 3rd upgrade for the Ice Tower, costing $340 on Easy, $400 on Medium and $430 on Hard. This upgrade had been improved to pop all bloons in the Ice Tower's radius (other than White and Zebra Bloons), rather than popping only some bloons.

While this upgrade no longer exists in BTD6, it is worth a mention that the Ice Monkey now pops bloons without any upgrades. Ice Monkey, however, requires Metal Freeze in order to pop Lead Bloons. 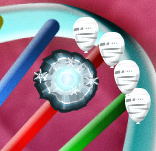 The result of Snap Freeze on Rainbow Bloons. (BTD4) 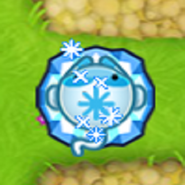 Snap Freeze tower in BTD5
Add a photo to this gallery
Retrieved from "https://bloons.fandom.com/wiki/Snap_Freeze?oldid=242037"
Community content is available under CC-BY-SA unless otherwise noted.