Sky Shredder is the fifth upgrade in Path 1 for the Monkey Ace in Bloons TD 6. It is a much more powerful version of Operation: Dart Storm. It blasts out 32 darts at a time at twice the speed as the previous upgrade. Each dart moves much faster than before and deals 3 damage with 5 pierce (8 pierce with Sharper Darts), and deals +2 damage to Ceramics. Its twin anti-MOAB missiles gained from Fighter Plane deal colossal damage to MOAB-class Bloons, each dealing 150 damage to up to 5 blimps at a time (+2 blimps with Exploding Pineapple), destroying groups of weaker blimps with ease and dealing big damage to stronger blimps. Additionally, all Sky Shredder attacks can damage all bloon types except Camo, including Lead and Black Bloons. Crosspathing with Spy Plane allows it to detect camo and lay waste to any bloon type.

The Sky Shredder is a sleekly designed military plane with a pointed nose, red stripes on its wings, and an opaque icy-blue wraparound visor. The paintwork of the aircraft is mostly black.

Sky Shredder's anti-MOAB missiles only targets MOAB-class bloons and homes weakly at them.

Sky Shredder can also receive the Centered Path targeting option when given the 5-0-2 crosspath.

The Sky Shredder is highly capable of becoming one of the overall strongest global-ranged towers in the whole game for its price. Even without considerable Monkey Ace micromanagement, the sheer number of darts and missiles ensures that they will both almost never miss bloons and blimps. This allows the Sky Shredder to become an excellent choice on maps that support optimal Monkey Ace flight patterns (such Four Circles, Underground if using Figure-8, or Park Path if using Centered Path). Pairing with Alchemist buffs from Stronger Stimulant is recommended, as it increases the Sky Shredder's damage output by nearly 50%.

Sky Shredder is overall much stronger compared to when it was first released, with most of the buffs attributed to bonus dart damage. It did receive a small nerf to its anti-MOAB missiles, but its grouped popping power versus MOAB-class is a lot more reliable. The basic dart projectile size buff for all Aces is effective for Sky Shredder too, as its darts possess the majority of the Ace's damage potential. 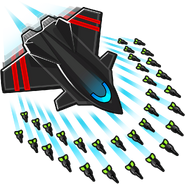 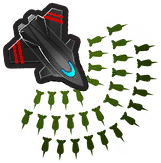