Yes, can decamo (except Black Bloons)

Signal Flare is the third upgrade of Path 3 for the Mortar Monkey in BTD6. It gives the Mortar Monkey with camo detection, and allows it to strip off Camo properties. However, it cannot strip off camo from bloons it cannot damage (i.e. Camo Blacks and Camo Zebras), and it can never strip DDT camo under any circumstance.

Signal Flare is useful for combined damage and decamo for an affordable price. The infinite range of the Mortar Monkey also makes it handy on maps with lots of Line of Sight or with poor central placement.

Do note that this upgrade has a unique weakness against camo blacks and zebras, as well being unable to decamo DDTs whatsoever. Because of this, most other sources of camo detection are generally preferred over this when available.

Signal Flare with Rapid Reload in BTD6, on an angle 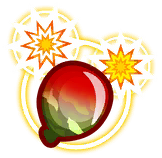 Instamonkey for Signal Flare
Add a photo to this gallery

Retrieved from "https://bloons.fandom.com/wiki/Signal_Flare_(BTD6)?oldid=271620"
Community content is available under CC-BY-SA unless otherwise noted.