Shrapnel Shot is the second upgrade of Path 2 for the Sniper Monkey in Bloons TD 6. It causes bloons damaged by the Sniper's bullet to send out 5 sharp fragments, similar to the Bomb Shooter's Frag Bombs upgrade, but in a 45° cone shape as opposed to a full 360°. Each piece of shrapnel deals 1 damage per bloon (more with Path 1 upgrades) onto up to two bloons (more with Supply Drop and Elite Sniper), though sprays of shrapnel can deal more damage if close enough to nearby bloons. Note that shrapnel does not deal damage to the bloon hit by the bullet, making this upgrade not so effective for doing single target damage.

Supply Drop is the only upgrade that increases pierce of the shrapnel, from 2 to 5, while Elite Sniper retains the 5 pierce per shrapnel.

Shrapnel Shot retains the goggles and blue beret of Night Vision Goggles, whilst adding a yellow explosion symbol to the beret, granting the monkey a dark green camo pattern jacket, and painting the end of the barrel light green with a yellow stripe.

The barrel paint and explosion symbol are retained on higher tier crosspaths.

Shrapnel Shot causes every shot from the Sniper to generate 5 chunks of shrapnel in a 45° cone centered on the angle the Sniper made the shot from; each shrapnel chunk deals 1 damage with 2 pierce, increasing with top crosspathing. (Full Metal Jacket also grants shrapnel Normal type, allowing for any bloon to be popped)

Because it is an upgrade above Night Vision Goggles, Shrapnel Shot receives Camo Prioritization, allowing it to prioritize Camo Bloons over other types when active.

Shrapnel Shot is an upgrade that addresses what was historically one of the most critical flaws of the Sniper Monkey, in that they lacked any form of grouped popping power and was often overwhelmed because of its single targeting capabilities, frequently causing bloons to split into large groups of their children layers that flustered the Sniper. In such a scenario, Shrapnel Shot can take out one bloon directly as well as pop several other bloons indirectly, making such bloon swarms less of a hassle.

A Shrapnel Shot Sniper Monkey orients them more as a global-ranged limited grouped bloon popper. Different crosspaths or further upgrades will improve the grouped-popping potential in very different ways for the Sniper. Although limited to either high shrapnel damage at the cost of slow attack speed or more frequent shrapnel at the cost of low single-target damage, both options provide an adequate specialization for the Sniper versus grouped bloons. The Path 1 upgrades Large Calibre and Deadly Precision purely improve damage, while the Maim MOAB and Cripple MOAB upgrades allowing the shrapnel to apply stun effects to multiple blimps. Faster attack speed from the Path 3 upgrades allows the pure shrapnel to be shot at a faster rate. And lastly, further upgrading on Path 2 Bouncing Bullet allows the bullet to hit multiple bloons, help point the shrapnel against the direction of bloons, and can produce multiple shrapnel sprays per bullet hit.

Shrapnel Shot provides the Sniper with grouped popping potential that it previously lacked completely in BTD5. However, shrapnel was formerly almost not viable past Freeplay rules, as Super Ceramics had fewer children and had much higher HP. After the rework in Version 17.0 alongside additional special Shrapnel Shot interactions, it has become a lot stronger than when it was first released.

The upgrade had been reworked to become centered around a coned spray of 5 projectiles for every point of damage instead of 8 projectiles in all directions upon destroying. In later updates, the shrapnel attack had been given more benefits from crosspathing, which gave more variety to crosspath options outside of purely Path 3. The shrapnel attack is also further improved with further upgrades along Path 2.

Spray of 5 shrapnel pieces, since Version 17.0 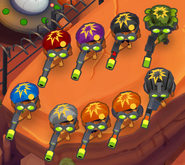 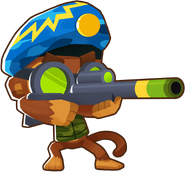 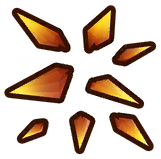