Shipwreck is a Special Mission in Bloons Monkey City. In this mission, every tower except the Monkey Buccaneer costs double their original price. Players must defend against 22 rounds (24 rounds in Bloon Dunes) of stepped up Bloons (Round Ramp). There are four whirlpools located inside looped parts of the track. The whirlpools can pop all types of bloons with an activated ability which acts like a normal Bloonchipper. Players earn $6000 and 500 XP upon completion, along with 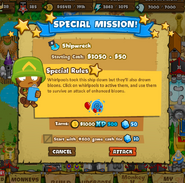 Capturing a Shipwreck tile NLL, with Monkey Teams, and a bonus MKP