+8% attack speed and pierce, affects nearby Ninjas (shinobi boost, stackable up to 20 times)

Shinobi Tactics (commonly shortened to Shinobi) is the third upgrade of Path 2 for the Ninja Monkey in BTD6. It allows itself and all Ninjas around its radius to increase attack speed by 8.7% (multiplicative, multiplies cooldown by 0.92x each time) and pierce by 8% (additive). This upgrade's buff can stack up to 20 times, for up to +430% attack speed and +160% pierce.

Shinobi Tactics can be used to improve the overall performance of all nearby Ninja Monkeys within range. Placing a considerable number of them can greatly empower higher level Ninja Monkeys, specifically Grandmaster Ninja and Master Bomber. Themselves also provide considerably good Distraction and Counter-Espionage effects if placed within densely packed groups of Shinobi Tactics.

Shinobi Tactics now also provide a pierce boost to nearby Ninjas, which makes a significant difference versus dense rounds. It was likely also done to improve simple Shinobi spam in itself. 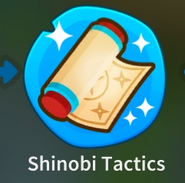 Upgrade artwork as shown in the upgrade menu 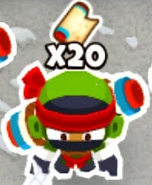 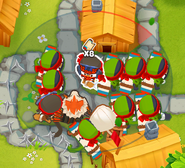 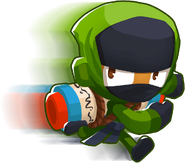 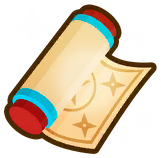