Shielded Bloon are new types of bloons that made their debut in Bloons Super Monkey 2 (Stage 1-4), and also appear in Bloons Adventure Time TD and Bloons Pop!. As their name suggests, they have a shield around them, which takes 30 hits (5 in BATTD, 1 to break in Bloons Pop!) to be destroyed, except for the Mini MOAB's, which takes 50. Similar to Camo or Regrowth Bloon types in BTD5, any bloon (even Glass, Golden and UFO) can be a Shielded Bloon. The shield is only visible when the player hits it, but it will fade out soon after. With the exception of MOAB-Class Bloons, Shielded Bloons will be signified by the shock symbol on them. The shield also pushes away the Super Monkey in Bloons Super Monkey 2. 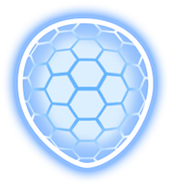