Shell Shock is the third upgrade of Path 1 for the Mortar Monkey in Bloons TD 6. Explosions will now produce secondary explosions that can stun and/or damage more bloons. Bloons closer to the blast will be stunned and those further out will receive damage instead. Blast radius of the explosions are larger than those from Bigger Blast, from 30 to 40 for the main explosion, the secondary stunwave is 20, and secondary damage wave is 60.

Bloons hit by the stunwave will be stunned for 0.5 seconds. Bloons damaged near the center of the main explosion radius will be affected by a stun. Bloons not affected by the stunwave are instead hit by a secondary damage wave and will become inflicted with 1 extra damage. The secondary explosions will pop up to 45 bloons, just like the explosion pierce cap for previous upgrades. In total it has 45 pierce from the main explosion and 45 pierce from the shockwave. The same bloon can be damaged by both the primary explosion and secondary shockwave all in one attack.

Crosspathing with Burny Stuff improves burn damage from 1 damage to 2 damage per tick, and burns at double the rate but half the duration, equating to every 0.625s for 1.875s. As the napalm only applies for the main explosion, a single explosion can inflict a total of 9 damage, 6 from the napalm and 1 from the secondary shockwave's damage.

Shell Shock upgrades the mortar cannon to gain a wider barrel, as well as receive two green bands around the lower end of the barrel instead of two yellow bands as its previous upgrade does. The operator now wears experimental goggles with green lenses, as well as dark grey gloves with thin white stripes. Crosspathing adds the usual visual changes to this type of Mortar Monkey. In the official upgrade portrait, the operator is grimacing and carrying a heavy artillery shell.

The cheapest tower capable of producing stun effects currently belongs to Shell Shock. Combined with its global range potential, Shell Shock is a decent option for simply stunning bloons, although it has rather low accuracy without Increased Accuracy. Target it around bends and use the Rapid Reload crosspath for the most effective stun effects, or crosspath with Burny Stuff for general increased damage to affected bloons.

The weaker 3-0-2 crosspath received a buff to the Burny Stuff damage which made it a little better for pure damage, but the 3-2-0 crosspath remains fairly similar. Since Mortars along the top path had been decreased in popularity during the 20's updates, mainly due to costs, Shell Shock received a price buff to make it more affordable as the cheapest stunning option.

Shockwave effect with the napalm upgrade

Shell Shock's explosion radius for both main and secondary explosions, tested on Rainbows 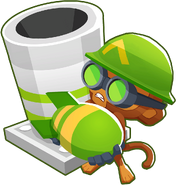 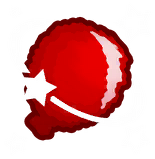