Shattering Shells is the fourth upgrade of Path 3 for the Mortar Monkey in Bloons TD 6. It allows the Mortar to remove Camo, Regrow, and Fortified properties from Bloons. This includes Blacks and Zebras with Camo, Regrow, or Camo Regrow, even if it cannot damage them.

Shattering Shells changes the mortar cannon's barrel into a vase shape, the entire barrel dark red, and the base becomes light grey. On the barrel is a yellow flame pattern with orange outline, the pattern placed just below the tip of the barrel. The monkey now wears dark red goggles, as well as retaining grey gloves, a grey headset, and red helmet with a flame symbol. On the upgrade portrait, the monkey crosses its arms and smiles, leaning towards the barrel as it fires a burst of flames.

The prime value of Shattering Shells comes from defortifying MOAB-class bloons, particularly from high-HP rounds especially from the notorious Round 98. Although not a single-handed game-changer, it can greatly reduce the difficulty of specific rounds where the main bloon reinforcements come from fortification. Its potential is greatest in Rounds 81+, where the accelerating scaling of blimps and presence of Fortified Super Ceramics both become significant issues.

Alternatively, Shattering Shells can be used as a niche support tower against rounds with fortification on earlier rounds, specifically starting from Round 62, and against rounds with Regrow Bloons. When it is used for this niche, it is usually to go for Blooncineration.

Since its introduction in the game, Shattering Shells plays an important role for reducing the strength of late-game Fortified rounds. Overall, it has been nerfed very slightly, with the only major nerf being a slight price increase.

Shattering Shells defortifying all Fortified BFBs on Round 98, as of Version 23.0 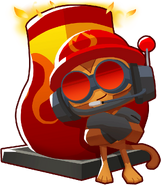 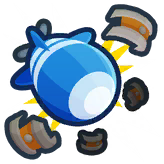