Sharp Shurikens did not receive any balance changes since it was first released in BTD6. However, it can no longer have both Distraction and Seeking Shuriken at the same time, as those upgrades are mutually exclusive as crosspaths for this upgrade. 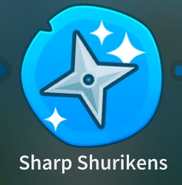 Light-grey shuriken, from Ninjas with Sharp Shurikens or higher