This is the second upgrade of the Path 1 for the Ninja Monkey. It costs $300 (Easy), $350 (Medium), $380 (Hard), $420 (Impoppable). Shurikens can pop 4 bloons each and is especially useful if combined with Seeking Shuriken. This allows the Ninja Monkey to deal with crowds twice as well. However, this should not be used as crowd control as it still is not enough to pop bloon rushes. 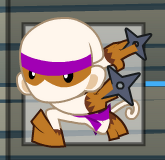 Mobile version
Add a photo to this gallery

Retrieved from "https://bloons.fandom.com/wiki/Sharp_Shurikens_(BTD5)?oldid=272132"
Community content is available under CC-BY-SA unless otherwise noted.