Sharp Shots is the first upgrade of Path 1 for the Dart Monkey in Bloons TD 6. With this upgrade, each dart will pop +1 bloons per shot, allowing each dart to pop up to 3 bloons instead of 2 compared to an unupgraded Dart Monkey. When interacting with Crossbow Master, the pierce bonus is increased to +6, for 16 pierce per shot.

Instead of a green headband as its BTD5 counterpart does, this upgrade adds a green tailband on the middle of its tail. The Dart Monkey appears to be focusing a throwing dart.

Sharp Shots increases pierce of each shot by +1, with exception of 1-0-5 Crossbow Master which gains +6.

Extra pierce is useful for the Dart Monkey at improving pierce. Sometimes, the extra pierce is necessary for beating the earlier rounds, especially on CHIMPS Mode, although normally adding more 0-0-0 Dart Monkeys is more efficient for the early-game anyway. The Quick Shots upgrade is usually more effective on higher-level Dart Monkeys regardless.

Sharp Shots has only received one change, that change being a crosspath change with Crossbow Master. 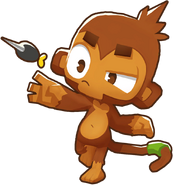