Sharp Shooter is the fourth upgrade of Path 3 for the Dart Monkey in Bloons TD 6. It increases the damage of Sharp Shooter arrows from 3 to 6, increases projectile speed, attacks every 0.75s instead of every 0.95s, and every 8-12 shots (with equal chance for any per-shot numbers between this range, inclusive, every 10 shots on average) it shoots deadly critical arrows that deal 50 damage each. Each arrow has 3 pierce (4 with Sharp Shots or 6 with Razor Sharp Shots), like its previous upgrade Crossbow.

Critical arrows are distinguished by their red-orange trail.

The Sharp Shooter upgrade changes the original crossbow design to a more advanced design. This upgrade also gives the Dart Monkey black boots and a black cover for its tail.

Sharp Shooter serves as an alright early-midgame tower, but it faces a lot of competition. Sharp Shooter can miss its shots and its crits can be inconsistent. In addition, its low pierce means that it can at times struggle to deal with the children leftover after a higher-tier Bloon is popped. 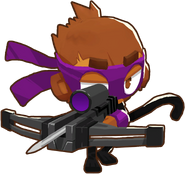 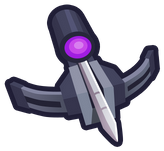