Sentry Paragon is the 5th upgrade of Path 1 for the Engineer Monkey. It allows the Engineer to build purple sentries that shoot high-damage plasma and explode instead of despawning, destroying nearby bloons. Each active Paragon Sentry shoots plasma at 15 times per second, deals 2 damage per shot, and each shot has 5 pierce. Once a Sentry Paragon is deactivated, it undergoes a brief 2-second phase (or immediately if manually sold) before exploding at slightly more than its own base range with 100 damage and up to 50 pierce.

Although the purple sentries, called Paragon Sentries, replace all of the Sentry Expert's four specialized sentries, Sentry Paragon has the highest overall DPS out of all Engineer Monkeys, excluding instakills from the XXXL Trap upgrade.

The Paragon Sentry is purple and appears much larger than previous sentries, with a slightly more complex design. It shoots plasma at a very high speed and deals 2 damage per shot with a pierce of 5 per plasma blast. Plasma can pop frozen Bloons and Lead Bloons, however it cannot pop Camo Bloons (unless camo detection is granted) or Purple Bloons, unless supported with another nearby tower buff such as Monkey Intelligence Bureau.

Sentry Paragon is a solid DPS option, although alternative options exist that fulfill a similar purpose. The main strength of Sentry Paragon comes from its Paragon Sentry plasma attacks, which deal a respectable amount of overall damage to both MOAB-class and bloons. Expired sentries additionally explode after a short delay for an unreliable but useful cleanup. Adding attack speed buffs such as Jungle Drums or Overclock to the Sentry Paragon Engineer is strongly recommended to maximize its damage potential. 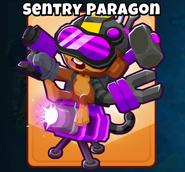 The Sentry Paragon as seen in the Upgrades menu

Insta-monkey icon
Add a photo to this gallery

Retrieved from "https://bloons.fandom.com/wiki/Sentry_Paragon?oldid=267827"
Community content is available under CC-BY-SA unless otherwise noted.