No (except in Bloons Monkey City Mobile)

The Sentry is a sub-tower spawned from a Monkey Engineer with at least the Sentry Gun upgrade. They will spawn every 10 seconds, and last 25 seconds before disappearing. With the Fast Engineering upgrade, the spawn time is reduced to 6 seconds Additionally, in BMC and its mobile counterpart, they suffer a bug where it is missing a line of code, "OnlyTargetPlacementLocations": true, so Sentries can be deployed anywhere, including on water.

The Sentry has no visible upgrades. However, it internally has one upgrade, that being Sprockets. The Sprockets upgrade increases the firerate of the Sentry by 27%. All other upgrades have no function, though the Sentry's upgrades will match the upgrades of its parent Engineer.

The Sentry is a tower spawned from an Engineer Monkey with the upgrades Sentry Gun, Faster Engineering, or Sprockets. Production rate increases with the second option, and +66% attack speed for the third. Most of the Engineer's upgrades will not pass on their upgrades to their respective sentries, but any external buffs onto the Engineer will buff the production speed of all sentries. Different from early game, not only engineer, sentry also can applies any various crosspath upgrade such as Oversize Nails or Cleansing Foam.

Upgrading further to Sentry Expert or Sentry Champion will spawn different types of sentries. Both of these upgrades will produce sentries with attacks that are far distinct from the standard green variants.

Also called "Super Sentry", all sentries will become SentryTier4s when Engineer's Workshop is upgraded to Tier 4. These sentries spawn every 20 seconds and last 37.5 seconds. These sentries also shoot twice as fast.

This is the first of the four Sentry variants that the Engineer can spawn after receiving the Sentry Expert upgrade. It's a red Sentry that shoots spiky balls which have high popping power and high efficiency deal Ceramic Bloons. Does not damage Leads and DDTs without Lead-popping support.

The second of the four Sentry variants spawned from Sentry Expert. This one is a black bomb-shooting Sentry. Cannot pop Blacks, Zebras, or DDTs without support.

The third of the four Sentry variants spawned from Sentry Expert, colored light blue and able to shoot snowballs that freeze Bloons. Does not freeze White and Zebra Bloons just like Ice Monkey without M.I.B. It also cannot freeze Frozen bloons or Leads either without M.I.B.

The final of the four Sentry variants that comes with the Sentry Expert upgrade. This one is a yellow Sentry that shoots laser blasts and has a high firerate but low pierce, it also deal extra damage to MOAB-class Bloons. As it is a laser-shooting sentry, it cannot pop Lead and Purple Bloons without popping support.

This type of Sentry is spawned by Engineers with the Sentry Champion upgrade. It's a purple Sentry that is very powerful but also unstable; it shoots plasma at Bloons and also delay briefly of time to cause explodes (causing up to 100 damage to up to 50 bloons) instead of just disappearing once its lifetime expires. Its weakness are only Purple Bloons and Camo Bloons.

Cold Sentry with buffs from two different Villages, granted from the Sentry Expert Engineer who was buffed by them 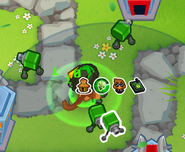 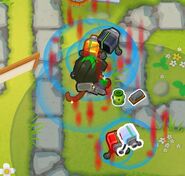