When upgraded to Semi-Automatic, the Sniper wears a more filled beret, colored orange by default, and wears grey earmuffs and two light-grey bandoliers across the monkey's torso. The sniper's rifle muzzle is thickened, and the orange bands on the rifle still remain. On the official portrait, the monkey is peeking through a pair of binoculars.

Crosspathing with Path 1 upgrades, changes the beret to receive two colored stripes on the beret, the beret's primary color being the crosspath and the stripe color remains orange. Adding Night Vision Goggles will give the monkey night vision goggles. Adding Shrapnel Shot will add an explosion symbol to the beret.

Similar to the BTD5 Semi-Automatic Rifle upgrade, the main strength of the BTD6 Semi-Automatic upgrade comes from its unrelenting single-target DPS. Although highly dependent on crosspathing in order to benefit the most out of this upgrade, both crosspaths are highly effective for their own special purposes. Crosspathing with Path 1 makes it an effective single-target DPS tower for a decent price, while crosspathing with Path 2, particularly with the Shrapnel Shot upgrade, makes it highly effective as a long-ranged cleanup tower against groups of weaker bloons.

The 2-0-3 Semi-Automatic upgrade is generally a more efficient option at overall DPS than the opposing Deadly Precision upgrade with the 3-0-2 crosspath. With exception of beating Ceramics, the tripled attack speed of the 2-0-3 Semi-Automatic generally outweighs the performance of just under 3x more damage per unit time from a 3-0-2 Deadly Precision.

The one other advantage of Semi-Automatic is that it can be further upgraded to Full Auto Rifle for even more increased overall DPS, further enhancing its overall anti-stalling power, just like for Semi-Automatic. 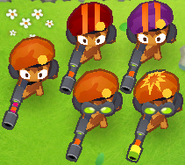 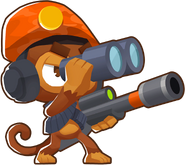