Seeking Shuriken is the first upgrade of Path 3 for the Ninja Monkey in BTD6. Shurikens will now aggressively home onto bloons, regardless of where the bloons are. Shurikens generally home at bloons based on the target priority of the Ninja at the time they were shot out.

Unlike BTD5, this upgrade is on a separate path to the Distraction upgrade.

Seeking Shuriken enhances the shurikens by allowing them to always follow bloons, maximizing the pierce potential of each shuriken. Adding it with Path 1 upgrades will increase the overall potential of shuriken attacks, with 2-0-1 Ninja acting as a quite solid early-game option. Seeking Shuriken is especially useful as the crosspath for Upper Path 1 upgrades (Double Shot, Bloonjitsu, and Grandmaster Ninja), as this will maximize the DPS of its more powerful shurikens.

Seeking Shuriken did not receive any direct balance changes since it was first released in BTD6, although it is now mutually exclusive with Distraction when interacting with Top Path Ninja.

The only worthy mention is the "Camo Prioritization" target priority that was given to all Ninjas in general. Strategies involving seeking for camos may be positively affected. 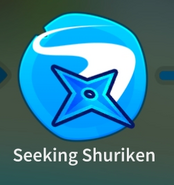