Sandstorm is a special mission in Bloons Monkey City which appears in Bloon Dunes. In this mission, bloons moving towards the left move faster than bloons moving to the right, being two times faster and two times slower respectively. Players can use the sandstorm ability to slow bloons and damage them as the storm progresses but it has a slow recharge time, being approx. 60 seconds. Like Monkey vs. Monkey, the rounds progress automatically. While the strongest bloon can be as low as Rainbow Bloons if Sandstorm is very close to the start of the city, this mission does have the potential for DDTs on further tiles, so make sure your defense can handle those.

Sandstorm is one of two BMC-Flash-exclusive Special Missions in the game to ban a certain tower type, the other being ZZZZOMG (bans Monkey Aces). Ice Monkeys and Banana Farms are restricted from this terrain, which was likely done to prevent the overpower of Arctic Wind or to prevent exploitation of income generation via Farms.

Any tower with unlimited pierce will be good here due to grouped bloons.

This only works if your Sandstorm is very close to your starting city. My tile I had has bloons up to zebra/rainbows, so stuff like ceramics or MOAB-Class renders this useless. This requires Glaive Ricochet and Anti-Camo Dust, and city level 13 or above. This will not likely give you a NLL bonus on minimal levels.

Strategy by Qwertyxp2000 the second[]

Works in up to BFB Sandstorms. Around my Sandstorm track were a bunch of BFB tiles. Completed in City Level 29 with Rank 7 Monkey Knowledge average for all towers.

Interestingly, I can pass it with Ninja-Mortar-Sniper Monkey Teams. So I didn't have to use Bomb Shooter, though I would recommend grouped 2/3 MOAB Maulers to defeat grouped MOABs and then Sandstorm any passing Ceramics.

Right now you should able to complete the whole mission. Always remember to use the sandstorm skill if there are too much of bloons charging. 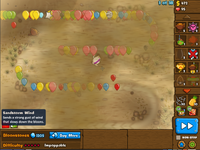 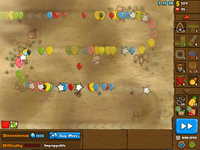 The Sandstorm ability popping many bloons one by one