This ability has a cooldown index of 0.25.

Ninja Monkey has a red belt just like a Bloonjitsu and has four green eye slits. Also, their fingers are in the same position as a Bloonjitsu, making the same "shush" position.

In BTD5 and BMC, it is very helpful to be able to have room to purchase the Sabotage Supply Lines upgrade for the ability in case of any potential overwhelming rushes. At the small price of $6650 for a 0/4 Ninja Saboteur, as well as a $1330 loss if one does buying and reselling, the player can highly reduce the potential overflow significantly. In BTD5 and BMC, it is more worthy of saving the ability, as it is much easier to gain cash in these games than in BTDB due to gaining cash from popping bloons rather than a per-6-second timer. 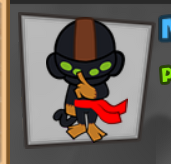 BTD5 Steam version. Note the bare feet
Add a photo to this gallery

Retrieved from "https://bloons.fandom.com/wiki/Sabotage_Supply_Lines?oldid=261570"
Community content is available under CC-BY-SA unless otherwise noted.