Red Acid (1 / 2.0s corrosion for 4.0s DoT, can be overridden by Purple Acid)
Golden Lead (attacks by this alchemist onto leads causes them to earn $50, leads only)
Golden Bloon (golden potion, all soaked non-blimp layers give +$2 per pop or outer blimp layer rewards triple income when destroyed)

Rubber to Gold is the fourth upgrade of Path 3 for the Alchemist in Bloons TD 6. This upgrade gives the Alchemist an additional attack, a gold potion attack that partially turn bloons and MOAB-class bloons (except the BAD) into gold. Bloons partially turned into gold provide +200% more cash per pop.

The Rubber to Gold Alchemist will now dress up as an early English alchemist. Additionally, its goggles and eyes both become golden in appearance. The artwork features that alchemist revealing a golden-looking liquid potion.

With the Path 1 crosspaths, Larger Potions adds a large backpack on the monkey's back, while Acidic Mixture Dip adds a bucket of acid on the right-hand side of the monkey's backpack. With Path 2 crosspaths, Stronger Acid changes the acid in the bottle to purple and gives the Alchemist white gloves, while the Perishing Potions upgrade gives it a black facemask and black gloves.

Rubber to Gold will add an extra attack that turns bloons partially into gold. Affected bloons will appear slightly golden; these bloons will earn +200% cash per layer popped. Its special attack comes out every 5 seconds and can hit up to 15 bloons. The gold effect lasts indefinitely and soaks through layers (but not for MOAB-Class).

penetrate multiple blimps or can

instakill them will consider all popped layers as if they were partially gold.

Rubber to Gold targets bloons using the standard targeting priorities. It throws lobbing attacks, including the goldifying potion, at bloons.

The acid pool attack is locked on Normal, being an on-track attack, and can only activate if there are no bloons nearby or if the offensive potion misses.

Rubber to Gold is a fraction of the cost of Monkey Town, a similar income-per-pop tower, but relies on attacks and proper positioning to maximize income. When utilized properly, it is a very efficient income source, possibly even more than Banana Farms in some cases. To maximize its total income, including its Lead to Gold benefit, the other defenses should be based mostly on slowing down the bloons, instakilling blimps, and avoiding lead-popping power outside of the Alchemist as much as possible. Maps with bends or curves benefit the income production of Rubber to Gold a great deal, but maps with multiple entries may decrease potential for Rubber to Gold farming.

Most changes listed here are quality-of-life changes to the Rubber to Gold attack and inherited buffs from Lead to Gold.

When converting bloons into gold:

Lots of Golden Bloons produced by Rubber to Gold effect

Lead Bloon affected by Rubber to Gold. Directly hitting the Lead Bloon by this alchemist will give the Lead to Gold effect 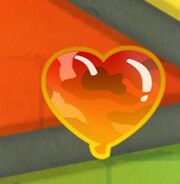 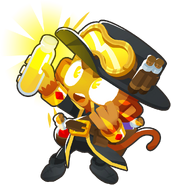 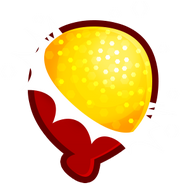 Rubber to Gold effect over a Red Bloon

Rubber to Gold effect over a Regrow Red Bloon