Roswell is a Beginner Difficulty track for Bloons Tower Defense 5 Mobile. It is one of the five exclusive tracks to the game.

It seems to consist of an isolated desert-like environment. A UFO appears to have crashed with an alien sign next to it. 3 flowers can be in view. Along the top-left side there is a fence, saying "Keep Out!", which parts of the wire appear to be broken. There are bits of rocks lying everywhere. 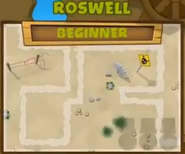 Roswell in the selection menu