Rocket Storm is the fourth upgrade of Path 2 for the Dartling Gunner in Bloons TD 6. Activating the ability produces waves of purple missiles for 8 seconds, producing waves (15 by default) of 10 missiles in a wide area that deal 5 damage each to up to 8 bloons, split among 0.5s each wave. Ability missiles are spawned out at a 130° maximum spread (52° with 1-4-0), move erratically, but do not travel past obstacles. Cooldown for the ability is 40 seconds. In addition, the upgrade improves the main rocket attack by giving +2 pierce to both the rockets and explosions, totaling 8 pierce for both. As the rocket itself uses up 2 pierce per bloon, the number of explosions per main rocket increases from 3 to 4.

When crosspathed with Focused Firing, the ability missile spread is reduced by 60%. Crosspathing with Powerful Darts increases ability rocket pierce by +2.

Rocket Storm drastically alters the appearance of the Dartling Gunner, converting adding several additional barrels for rockets in the center of the launcher itself. The gunner now wears an all-black full body suit with green-tinted lenses, mouth vent, and emblem shaped like a cut gem.

The ability's rockets are black with purple fins and tip.

Rocket Storm gains +2 pierce (and thus +1 explosion count) for its rockets, for 8 and 4, respectively, as well as the Rocket Storm ability.

This ability produces waves of 10 rockets, each dealing 5 damage, for 8 seconds, for a total of 15 waves, 1 wave every 0.5 seconds. The rockets are spawned with a 130° maximum spread and have Erratic movement, swinging wildly as they fire.

The ability is affected by speed buffs, allowing for more waves to potentially be spawned.

Rocket Storm customly aims based on direction and angle of where the Dartling points towards. It shoots straight movement projectiles controlled in a aim-based mobile style guided by touch-based mobility, albeit with some erratic angular deviation.

Ability rockets not only have erratic angular deviation, they also erratically move in a serpentine motion as they travel through the air.

In general, Rocket Storm is a decent midgame upgrade due to the ability providing a burst of power. As the ability is affected by buffs and the main attack also benefits greatly from additional buffs, it is extremely useful to add Stronger Stimulant, Jungle Drums and Pat Fusty or Gwendolin buffs onto the Rocket Storm. It can be used in many situations, including as damage or cleanup depending on the situation. As its cooldown is fairly fast, the Rocket Storm can be used multiple times on most rounds.

Note that the Gorgon Storm Monkey Knowledge applies stunning to the Rocket Storm ability, which could potentially be viable in stall strategies.

Rocket Storm received mostly nerfs overall, although in earlier updates it received a quality-of-life change that made 1-4-0 Rocket Storm more usable as a focused-firing option. That being said, it received a small price nerf in Version 25.0 due to dominant mid-game power compared to other Dartling Gunner upgrades oriented for mid-game, and later received a harsher nerf that increased the cooldown for its ability. Rocket Storm got nerfed once again in Version 29.0 and 30.0, the second update of which reduced its ability damage and duration. 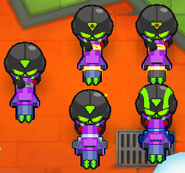 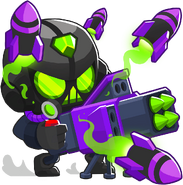 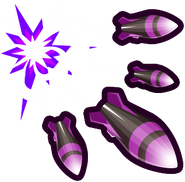 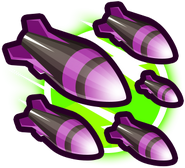 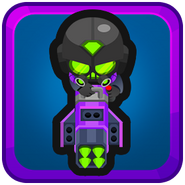 Rocket Storm ability accuracy with Path 1 crosspaths (23.0 and up)