Robo Monkey (sometimes shortened to just Robo) is the third Path 2 upgrade for the Super Monkey in Bloons TD 6. Upgrading to Robo Monkey grants the Super Monkey with a pair of independently shooting guns from each arm, with each dart dealing increased pierce (7 instead of 4). In addition, every 15-20 shots, it deals small crits that deal 10 damage instead of 1, functioning very similarly to Sharp Shooter. Unlike BTD5, it cannot naturally pop Frozen or Lead unless Path 1 upgrades are bought.

With the Robo Monkey upgrade, the Super Monkey becomes a cybernetically enhanced with a robotic suit. Much of the Robo Monkey's color scheme is greyish purple, as indicated by his various mechanical enhancements. He carries two wide-barreled pistols, presumably full-auto pistols, one on each hand; the pistols have purple rims, and has wide hollow airways along the middle of the gun. Metal wristbands are worn around his wrists, and his hands are left unmodified. His helmet has a wide black lustrous visor, his helmet covering all of his head except the front of his ears and his mouth. His chest and pelvis each are reinforced by breastplates and pelvic plates, respectively, made of metal. He also appears to wear metallically enhanced footwear with what appears to be purple socks. His tail is covered grey. The rest of the suit appears to be reinforced by mechanical tubes.

When crosspathed with Laser Blasts or Plasma Blasts, the Robo Monkey's visor no longer is visible and becomes replaced by the respective goggles of either upgrade. With Knockback crosspath, Robo Monkey receives a yellow stripe along the middle of his helmet, while Ultravision changes it to two yellow stripes on alternating sides.

Robo Monkey gains a second arm, allowing for independent targeting with each arm, and duplicating its base attack. This attack receives +4 pierce (for 7) and the ability to crit every 15-20 shots, dealing 10 damage instead of 1. Note that the second arm cannot share the same targeting priority as the first arm.

Robo Monkey can access the Camo Prioritization targeting priority if given the 0-3-2 crosspath, which when set allows the Robo Monkey to prioritize Camo Bloons before any other bloon type.

Robo Monkey is fiercely powerful at inflicting high single-target damage to various bloon types. Packing with high range, a decent amount of pierce and dual arm targeting, it is a middle ground of other popular Tier 3 Super Monkey upgrades Sun Avatar and Dark Knight. What gives Robo Monkey a slight edge over either two is the potential to inflict critical shots onto targets, albeit randomly but quickly, as if it was a super fast double Sharp Shooter. Since it attacks so fast and both arms have separate crit counters, its crit rate is somewhat consistent, making the damage for any single target range between 1.45 and 1.6 per arm, with ~1.514 being the average. That being said, crit shots do somewhat reduce the Robo's otherwise high tendency to become overwhelmed by bloons.

The Robo Monkey does possess quite a few weaknesses, one of these is the forced dual targeting and double Alchemist buff usage, making it less desirable when compared to its cousins Sun Avatar or Dark Knight. Its stepping stone upgrade Tech Terror is not a bad option, however, given that the Tech Terror's ability can be utilized for its high-damage area-of-effect ability. While having lower buffing potential overall, less money needs to be invested for Robo to make the most out of its value.

Try to make full use of the Robo Monkey by utilizing its large range, full discounts from Monkey Commerce villages, and usage of consistent buffs such as Jungle Drums or Overclock. Alch buffs and Obyn Greenfoot buffs are okay, but are generally not worth pursuing. Pat Fusty would be the best option with Robo spam, but given his low influence range and uptime issues it's generally not worth the effort outside of completing easier maps. In fact, the best buffs for Robo Monkey are based on influence

buffs that are also not dependent on a specific hero. Given that Robo is not even the best mid-to-late-game option when paired with hero buffs, the buffing strategies to focus for Robo Monkeys are Monkey Commerce Village strategies.

Besides its critical hit potential, there is one other area that Robo Monkey performs better than the other two Tier 3 Super Monkeys: countering bloons for cheap. With Path 1 upgrades, it has the most pierce out of the three, and unlike Dark Knight, the 2-3-0 Robo Monkey won't knock bloons back, dealing with Regrow Bloons faster than they can regenerate so that they won't multiply fast enough to overwhelm your defenses. Likewise, 0-3-2 Robo Monkey has a slightly better range coverage while still applying Knockback effects to bloons, useful for slowing small groups of Super Ceramics from a wider range at a lower cost. However, since it does suffer from a lack of attack speed when compared to the Plasma Blasts crosspath, it isn't usually an effective choice.

The middle-of-the-road DPS of the Robo Monkey means it tends to be often outclassed by other Super Monkey upgrades with their respective uses, whether it be the expensive powerful three-rayed Sun Avatar that requires a lot of support or the low-cost mobile Dark Knight with high blimp damage and decent Ceramic knockback. Despite considerable buffs to the Robo Monkey upgrade, which includes one quality-of-life change to its arm targeting settings, it remained consistently C Tier on many highly experienced player tier lists until around Version 27.0 where it gained a significant buff that now allows each projectile to gain random crits.

When upgrading to Robo Monkey:

BTD6 portrait in the upgrades menu before unlocking 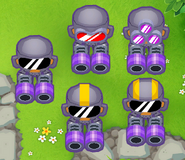 Robo Monkey as of Version 20.0, with new separate target priorities

Robo Monkey set on First-Last. Note that there is minuscule difference between the reverse.

Robo Monkey set on Last-First. Note that there is minuscule difference between the reverse.

Lots of crits from some Robo Monkeys 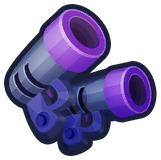