Robo Monkey is the 3rd upgrade of the Super Monkey for Path 2 in Bloons TD 5. It costs $7650 on Easy, $9000 on Medium, $9720 on Hard, and $10800 on Impoppable. It can fire regular darts, Laser Blasts, or Plasma Blasts from both of its guns, depending on first path upgrades. Each gun is capable of targetting independently, making it especially effective for tracks with multiple paths. Occasionally, it can shoot at two completely opposite directions, one example being when a Robo-Monkey is shooting at Lobby. Because it can shoot with two guns at a time, it is also stronger against MOAB-class bloons than a regular Plasma Monkey.

Arms are now alternating depending on the right arm's setting: First/Last or Close/Strong.

Robo Monkey can now use separate target priorities on both arms. 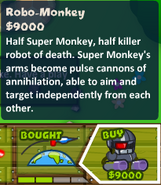 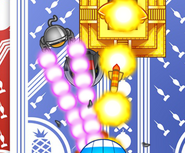 Retrieved from "https://bloons.fandom.com/wiki/Robo_Monkey?oldid=258125"
Community content is available under CC-BY-SA unless otherwise noted.