Ring of Fire is the fourth upgrade of Path 1 for the Tack Shooter in Bloons TD 6. It exchanges the hot tacks from Hot Shots with deadly flame rings. These rings shoot at a +33% faster rate (every 0.47s) and deal 3 damage each (+1 per Path 3 crosspath) to up to 60 bloons per fire blast (+10 per Path 2 crosspath). Although much weaker against MOAB-class bloons compared to the previous upgrade, it is extremely powerful versus regular grouped bloons prior to the rise of Super Ceramics. It cannot pop Purple Bloons, a weakness that only itself and Inferno Ring possesses, at least for the Tack Shooter.

This upgrade increases the diameter of the base, decreases its height, and is now black. The overall tower's color changes from a gold-yellow to a blood-orange, while its eight black ported barrels glow white hot from the heat. The extruded features that hold the barrels are colored yellow at the end. An additional orange flange is added between the black base and tower. The rounded top is removed and replaced with an indefintely blazing fire, revealing a hollow interior.

Path 2 crosspathing increases the Tack Shooter's height and adds claw-like protrusions to its base.

Path 3 crosspathing adds extra turrets on the side, 2 with More Tacks, 4 with Even More Tacks.

Ring of Fire exchanges the Orbital Spray for a Zone attack that affects the entirety of its range; it also deals +1 damage (for 3) with 60 pierce, and 33% faster attack speed (0.47 second attack cooldown)

The following is a list of statistics of a Tack Shooter with Ring of Fire. It includes its base statistics and all associated crosspathing interactions. Expand the box on the right to see further information.

The following are a list of wiki-written damage types associated by a Tack Shooter with Ring of Fire. These damage type statistics include how it attacks and how these attacks would affect bloons. Expand the box on the right to see further information.

Sacrificing its high MOAB-class damage for much stronger grouped damage, the Ring of Fire is an effective method for countering grouped bloons. It is highly effective against mid-game grouped bloons, but it falls off greatly in late-game, where a majority of regular bloons are Super Ceramics.

Buffed to deal more damage and interact with crosspathing more fairly. The current iteration of crosspathing benefits is that Path 2 hybridizes range and pierce while Path 3 adds more damage. 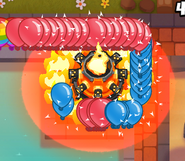 Ring of Fire popping Rainbows into Pinks and Pinks into Blues 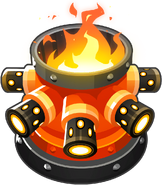 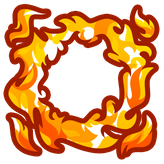